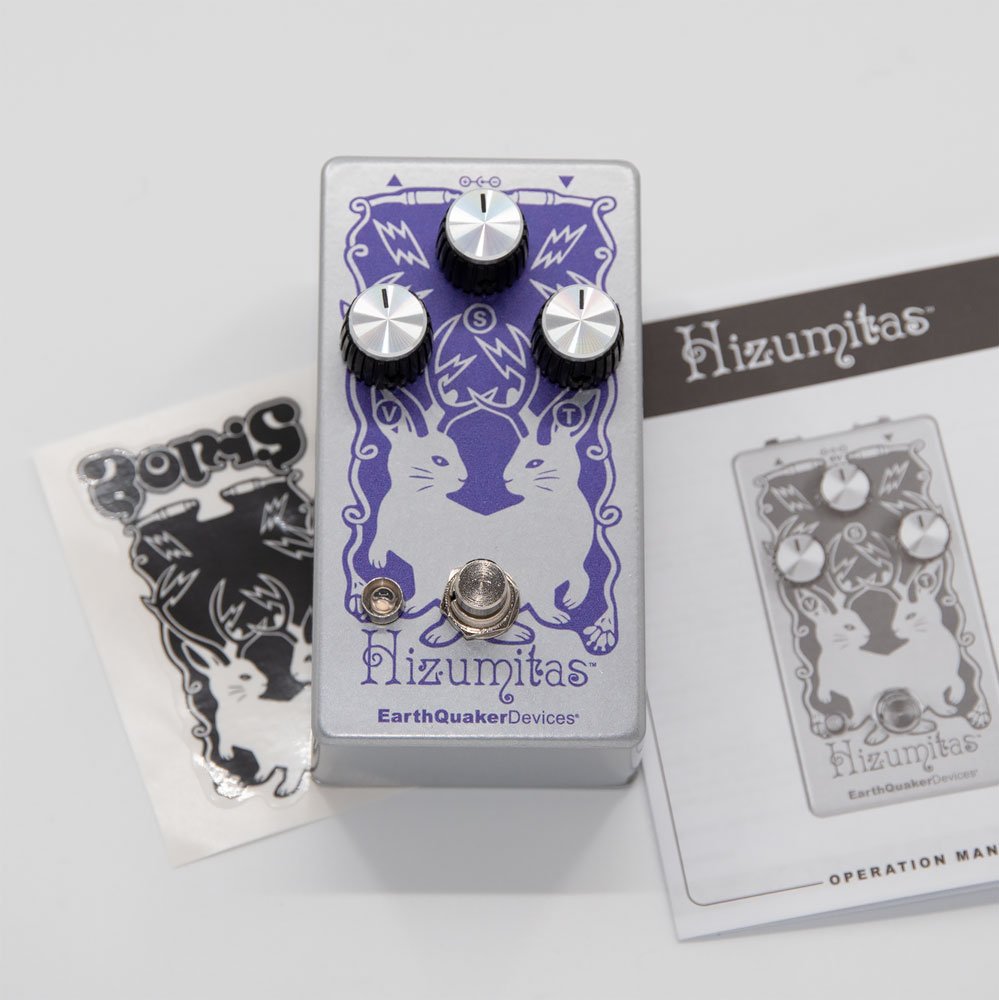 Presenting Hizumitas From EarthQuaker Devices...While you may not be familiar with the band Boris or their relentlessly heavy sound, the new Hizumitas pedal might just melt a place in your heart. This simple three-knob affair can dish out some intensely heavy gain and sustain without devolving in a puddle of indistinct mush. At the lower end of the gain levels you could pass it off as very capable hard/rock metal device. But with it's free-ranging tone control and near limitless amounts of sustain, you can push the outer bounds of your creativity. But it's not a pedal for sloppy players trying to cover their tracks: It's percussive and precise even when pushed to the limits. And if there was ever a pedal that works with a wah, this is it. If you like fuzz, you'll love it. If you don't like fuzz, you'll love it even more.

Hizumitas was designed for the one and only Wata from the legendary experimental band Boris, one of the heaviest bands ever to come out of Japan. The trio of guitar sorceress Wata, drummer and vocalist Atsuo, and double-neck bassist, guitarist and vocalist Takeshi has almost 100 releases filled with genre and brain-melting music.

Wata, always seen and heard on stage wielding her black Les Paul Custom, mixes killer riffs with searing, fluid, or jaggedly melodic leads and controlled walls of feedback, often with help from an EBow. It's a connection of chaos and melody that has enchanted Boris fans worldwide and influenced many bands that have followed in their considerable wake. Simply stated, no other band sounds like Boris, and no other guitarist rocks like Wata.

But with EQD's Hizumitas fuzz on your pedalboard, you can carve out your own singular, mega-heavy tone.

Hizumitas is a faithful recreation of Wata's go-to distortion pedal, the Elk BM Sustainar. The Elk is a Japanese variant of the very well-known "Triangle" BMP. The designers at EQD tried several vintage BMP's during development, found that each pedal was wildly different and realized that to truly capture the magic they needed the original. Wata graciously sent her beloved pedal halfway around the world, and EQD discovered that it had something special the others didn't have: heavy saturation with a gritty edge and massive bottom while maintaining a clear and dynamic tone with enough mids and top end to cut through any sludge. The studious wizards at EQD have built all of those characteristics into the Hizumitas.

This fuzz/distortion brings loads of heavy distortion and smooth sustain and an underlying grit that sounds like the speakers are on the verge of ripping apart while delivering amazing and unexpected clarity from such an aggressive sounding pedal.

The Sustain control has a wide range of saturation, meaning even small changes will significantly affect the overall tone. Hizumitas responds excellently to all types of pickups and playing dynamics. Your power chords will sound huge and heavy, while open chords will be dynamic with fantastic note separation, and single note leads will come across smooth and powerful, especially with the neck pickup.

The Tone control can drastically change the character of the distortion in conjunction with the tone. Bass frequencies are boosted clockwise, and treble frequencies are boosted counterclockwise. The tone control can go from an aggressive mid-range grind to piercing highs as you turn it counterclockwise. As you turn it clockwise, the mids become less present, the highs are tamed, and a humongous, thundering low end comes to the forefront. The Volume control offers massive output gain with unity at around 9-10 o'clock and beyond that, prepare to hear and feel the power of Hizumitas.