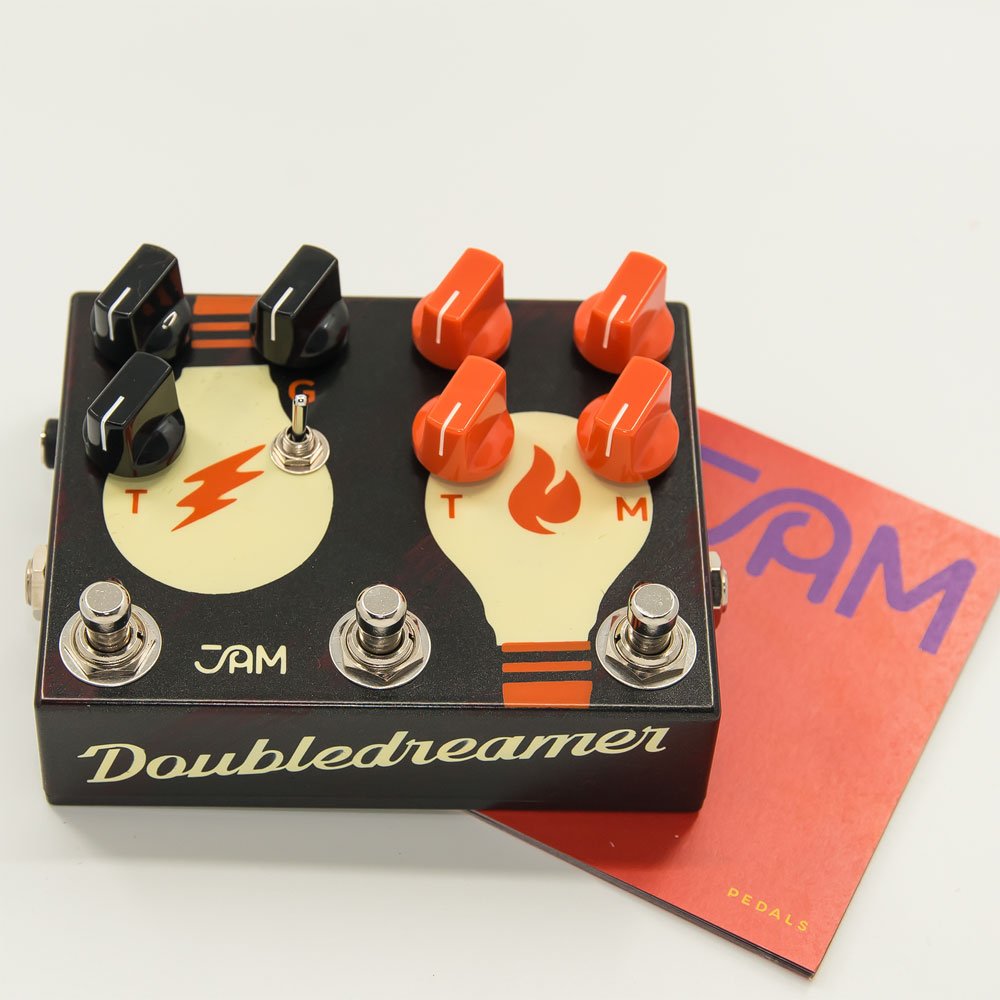 Introducing the latest double inspiration from the JAM Pedal crew. The DoubleDreamer is a perfected version of the wildly popular TubeDreamer-88 that takes the boost/drive combo to new heights. On the right side you have the Lucy Dreamer, JAM's proprietary transparent overdrive with a wet/dry mix for unparalleled tone shaping. On the left you have old faithful, the TubeDreamer (formerly TubeDreamer 58) which contains a NOS chip from the original 808 pedal combined with innovative circuitry that breaths new life into a classic overdrive sound. Furthermore the high gain boost circuit is now accessible from a middle footswitch and can be assigned to either circuit alone or both at all times. From mild to hot, clean to dirty the DoubleDreamer provides the soulful midrange and harmonically rich grit that guitarists crave.

According to JAM, the Lucy Dreamer drive circuit is their most transparent offering to date. However the word transparent is a buzzword that is used so often it's become hyperbole. So in this case we think natural is much more appropriate. The Lucy was designed to be the perfect "tube-style" overdrive, and depending on your taste in amplifiers the Lucy Dreamer acquits itself well, with a few happy surprises. It's got a strong mid-range presence a la the venerable TubeDreamer but less compression, fatter low end bloom, and stunning harmonic content in the high register. Compared to a smaller cranked amp, the Lucy holds together well on the low end and does not lose definition. The grind factor is all there but in a linear fashion that's both sparkling and saturated. The familiar controls are laid out up top: Level, Tone , Blend and Gain. Once you dial in your general direction, check out the wet/dry mix....

The wet/dry signal mix for the drive circuit that opens up a universe of tonal options. All the way left is pure clean signal with gain seeping in as you turn the knob clockwise. It's almost like playing in stereo through two identical amps: one dialed in for beautiful cleans and one turned up to searing levels. Our personal favorite is just under halfway on the blend with the gain cranked. You get a defined clean tone bathed in a flaming hot signal that adds both sustain and depth to the sound. It's just downright fun and only one of a million ways to use this control. And for the super tweakers they even added an expression pedal out so you can control the blend with a flick of the foot.

JAM's marvelous TubeDreamer features components used in the original 808's like carbon-comp resistors and even the legendary JRC4558D chip. With that kind of head start, it only took a couple tweaks to create the best sounding TS-style pedal we've ever heard. They specifically tuned the midrange frequency register to have a thicker overall profile which adds a depth to your tone that is hard to find in other overdrive pedals, especially those of TS influence. Combined with a set of asymmetrical clipping diodes, the TubeDreamer is an extraordinary example of dynamic, amp-like overdrive. It's rich and clear like their old TubeDreamer 72 but with a beautiful crunch that can be worked into absolutely searing sustain.

High Gain Boost - If you have seen either of these circuits in individual pedal form you'll notice they both have high gain options. The TubeDreamer has a mini toggle and the new Lucy Dreamer has a footswitch activated boost. We think they made the right call on the Double Dreamer by adding a third footswitch because it makes it easy to kick on and off in a live setting. They also added a really cool mini toggle feature where you can choose which side is affected by the boost, left only, right only or leave it in the middle and the boost works on both circuits! In functionality this is similar to the toggle switch previously found on the Tube Dreamer 88, adding a gain jump in the overdrive. It's geared more towards saturation and harmonic content rather than volume, so if you generally like it hot, this could easily be an "always on" switch.

In the mad world of pedals it's a known fact that pretty much everybody makes a tubescreamer. However not everybody has perfected it, which in a physical and auditory sense, seems to be the feat that JAM has pulled off with the DoubleDreamer. In pairing the Tube and Lucy Dreamer, these circuits work seamlessly with any style of guitar and most importantly, any amp so it can cover serious ground in the studio, at home or on the road. If you think you like tubescreamers and especially if you think you don't like tubescreamers, the DoubleDreamer is the answer to your prayers.