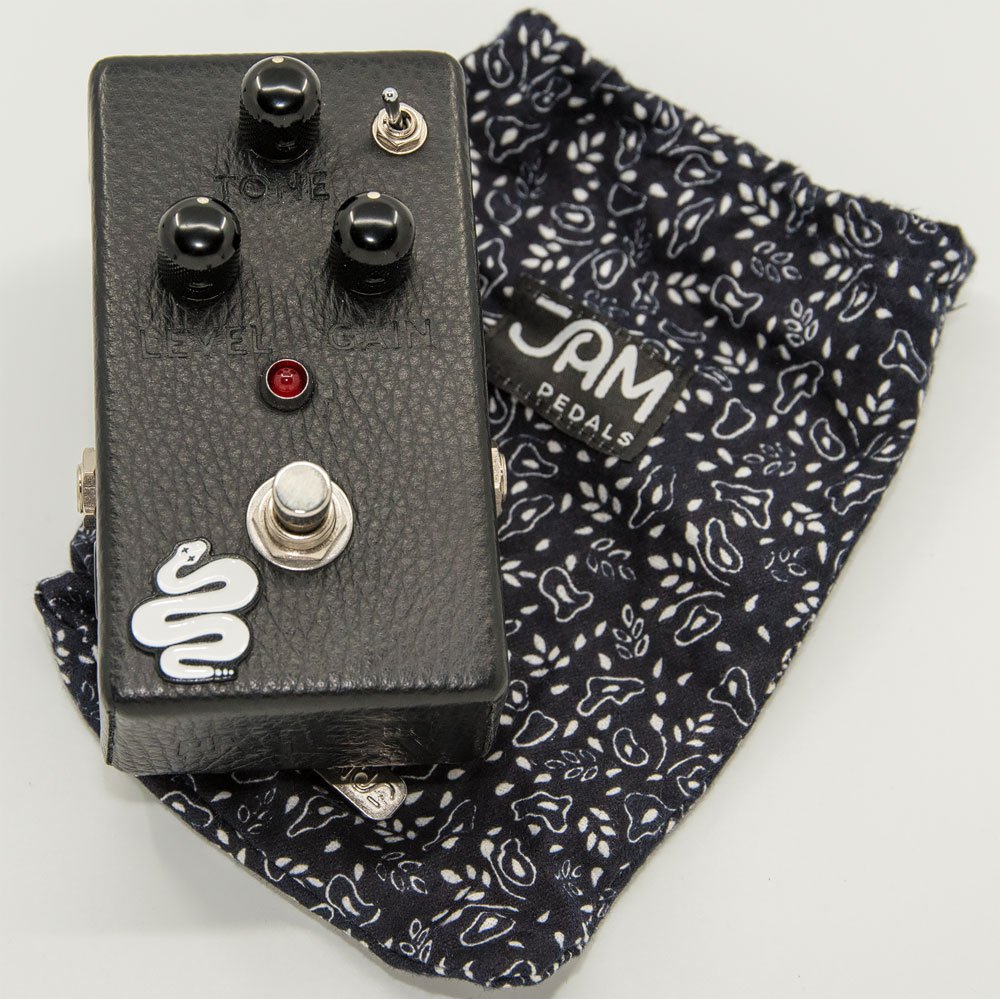 For a limited time only here is the ultimate Rat King: The Rattler Distortion LTD. This circuit is a true-to-form reincarnation of the original ProCo Rat distortion pedal that changed the way people thought about high gain effects. In order to perfect the design without losing it's true voice the Rattler features real NOS LM308N chips; and when they are out....they are out. This prompted the 2019 release of the Rattler LTD which aside from sexy snake skin tolex packaging features complete point-to-point wiring. The imminent extinction of certain NOS components is threatening the Rattler design, so Jannis and the JAM crew figured they would make the most of what's left resulting in the highest quality Rattler's ever produced. Each pedal features a zipper on the back where you can get a peek at the craftsmanship but those concerned with wear and tear can put on the signed backplate. As a bonus the LTD features the low gain stage switch that gives you extra clean headroom with the same great crunch. As always, JAM differentiates themselves by using unique architecture and hand-assembling (and painting) each unit in Athens, Greece. Some of the best guitarists in the world swear by JAM Pedals, come find out why.

The Rattler is able top bring this coveted voice to life thanks to tedious R&D combined with components faithful to the original. The whole circuit revolves around a now famous op-amp, the Motorola LM308N. The other key components are carbon comp resistors which can operate unfazed when hit with high energy pulses, and symmetrical diode clipping.

Symmetrical clipping takes your overdriven signal and clips the positive and negative waves uniformly resulting in a smoother classic overdrive that is less grinding than the standard rattler. Once you shape your tone and set the level, the gain knob lets you decide just how massive your sound will be. That being said, the most alluring characteristic of this pedal is the sheer musicality behind the grind. Your natural signal is retained in such a way that no matter how much gain you dial in, you still sound like you, which is rare with many distortion pedals in the game. The Rattler has the added functionality of a low-gain switch that opens up a whole new dimension to the Rattler sound. The sound is "cleaner" but more importantly it gives you the chance to hear more interplay between the pedal and your amp dynamics. It's a great feature for players who want to integrate the Rattler sound into less aggressive styles of music.

Thanks to this special X factor, the Rattler has made its way onto the boards of big name artists who previously used the ProCo Rat. Genre is almost irrelevant in this list of legends ranging from Al DiMeola, Nels Cline, Julian Lennon, Robert Randolph and more. In the mad world of pedals it's a known fact that pretty much everybody makes a distortion pedal. However not everybody has perfected it, which in a physical and auditory sense, seems to be the feat that JAM has pulled off with the Rattler. Whether you know you're into distortion or not, curiosity might just kill the Rat.