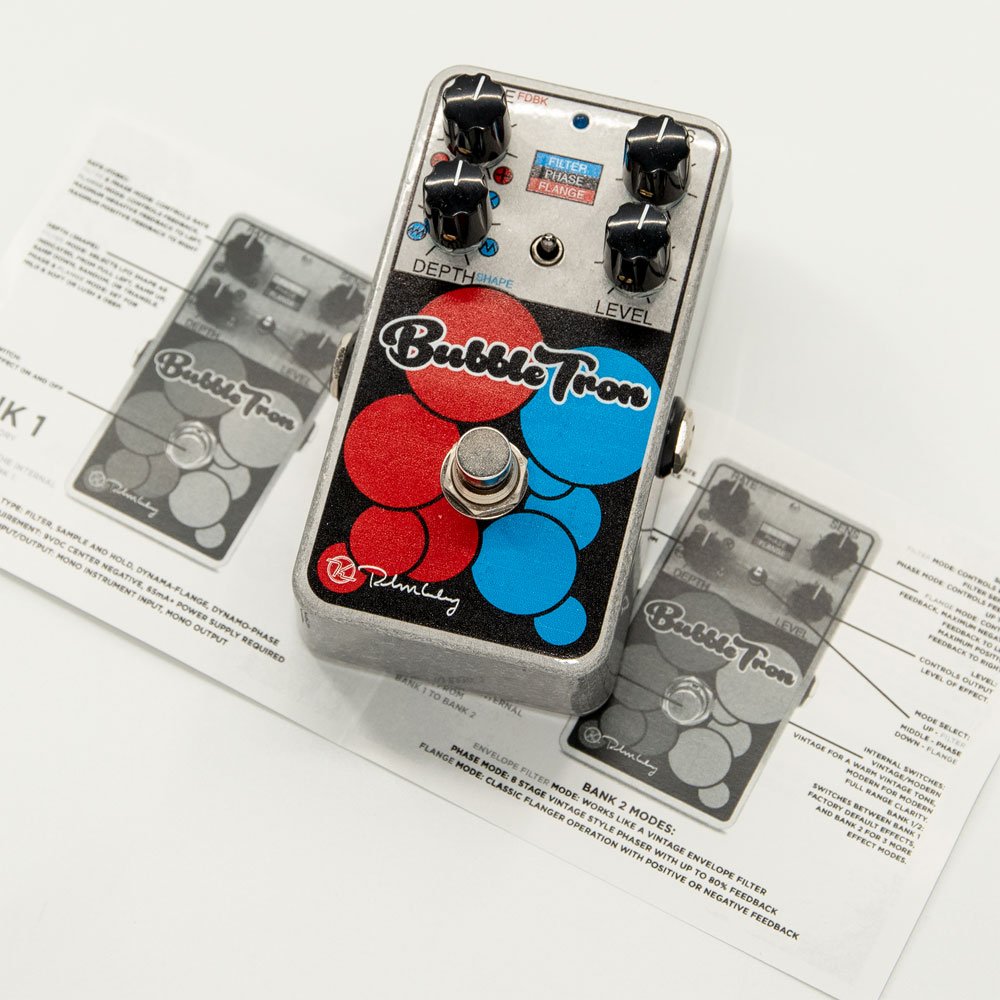 Introducing the pedal you never knew you needed: The Bubble Tron from Keeley Electronics. This circuit is designed to deliver luscious Phaser and Flanger effects like you've never heard before, with an extra special Filter mode for endless synth-y fun. The inspiration for this pedal comes from Keeley's love for Frank Zappa and his unique approach to rack mounted guitar effects in the 70's and 80's. It's that unmistakable vocal swirling around crunchy riffs that sounded like he was manipulating a wah, chorus, flanger and phaser all at once. In true Keeley fashion he managed to recreate that magic for ours and your benefit, along with a host of functions and tones that would blow Frank's mind. As the man himself said, "Without deviation from the norm, progress is not possible". So let's dig in.

There are 3 main functions on the Bubble Tron and 3 "hidden" modes that can be triggered by DIP switch inside the casing, which is something Keeley loves to do for his loyal tweakers.

Random Filter - For players who enjoy guitar synth pedals or effects that truly take your guitar "out there" this could sell you on the Bubble Tron alone. Technically it's a low frequency oscillator that bleeds into an envelope filter and with precision controls like a synth. The possibilities are endless but it's simple to dial in usable sounds unlike many of the complicated synth pedals out there. Keeley notes inspiration from the Maestro pedal Frank Zappa used on Ship Ahoy. Here's how we like to do it:

1) Pattern: The Depth control sets your LFO wave form, giving you 4 classic rhythmic patterns: Ramp up, Ramp down, Random, and Triangle. This is super fun for turning single chord stabs or notes into bouncing and stuttering grooves.

2) Voice: The Sensitivity knob is like the filter control on a synth, making the sweep go from a deep throb up to a crisp, cocked-wah and everywhere in between. The range is impressive and lends itself to just about any soundscape you're trying to create.

3) Speed: With the Rate knob, you set your tempo and you're off to the races. From an impossibly slow, creeping filter to chattering at the speed of light. This is real handy for getting your filter sweep to lock in with a band or your favorite drum loop.

Dynamic Phaser - The phaser effect that we know and love came about in the early 70's and thanks to folks like Mutron and MXR, it remains one of the most popular guitar effects. It's a really simple design that splits your signal into multiple paths (the early days it was just two) and sends them in and out of phase, creating a notched filter that sounds kind of like a rotary speaker. Typically the only way to change the effect is by altering the speed of the phasing, but Keeley decided enough was enough and created Dynamic Phase. On the Bubble Tron you of course can control the Rate and Depth of the Phase effect but the special sauce is that the effect starts phasing as soon as you pluck a string, hit a note or strum a chord. It's essentially behaving like an auto-wah, taking your dynamics and responding accordingly. This creates a really cool interplay where you decide how long the phaser runs its course: Hit a chord and let it ring to hear the full sweep or play a quick riff to get a bouncing, throbbing response. This is by far the "bubbliest" setting on this pedal and it can make you approach your playing in an entirely new way.

Dynamic Flange - This is the other tone that came from the heart of Frank Zappa and his obsession with gear. We've seen Keeley faithfully recreate vintage rackmount gear (Dyno-my-Roto), tape machines (ADT) and even real life echo chambers (Abbey Chamber) and his Dynamic Flange comes from a unit Zappa used called the MicMix DynaFlange. Flanging is an effect that predated stompboxes by a couple decades, coming from slowing down one of two (or more) tape machines playing the same track. This gives you the watery, chorus-like rotation that can be found on countless records through history from The Beatles' psychedelic vocals to the jet-noise rock guitar of Alex Lifeson. It's all how you use it. Zappa's MicMix Dynaflange did the same thing that inspired Keeley's Dynamic Phase: You control when the Flanging starts and stops from the fretboard, instead of the flange spinning around and around while you play to it. The controls work exactly the same as the Dynamic Phase, with rate, depth and sensitivity setting the point at which the dynamic control is triggered.

Now this layout is enough to keep you busy for days, but Keeley never stops short so if you open the back of the Bubbletron you'll find (2) dip switches: 1) Modern/Vintage for choosing a warmer, vintage tone or modern full range clarity 2) A whole new bank of effects that gives you classic, unadulterated Envelope Filter, Phaser and Flanger. This really blew our minds because it's the perfect way to present a modern take on an effect many hold dear to their hearts and ears. For some, taking an effect they know how to use and flipping it on it's head may be information overload, so Keeley ever-so-kindly gives you the choice. Naturally the factory setting is described above because trust us, it's worth it. But if you run out of attention span or have a gig where you can't go experimenting, simply flip a switch and voila! world class effects that you don't need a tutorial to figure out. This pedal is a true testament to the creative prowess at Keeley Electronics and to be perfectly honest, this demo pedal is now velcro-ed to my pedalboard. Try one out today or give it a listen below in a demo by the venerable Mike Hermans.