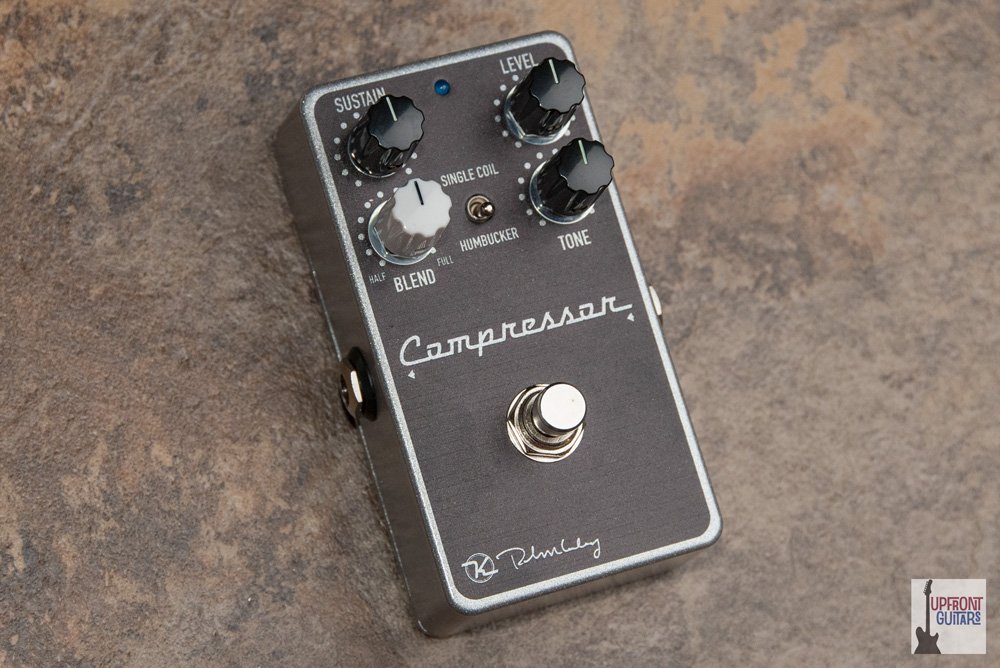 Introducing the newest addition to the Keeley Compressor series: The Keeley Compressor Plus! If you are familiar with the Keeley name, then you most likely know about Robert Keeley's famed Compressor circuits. The Keeley 2 and 4 Knob Compressors immediately put him on the short list of engineers that are making studio-grade gear available at your feet. For the first time in nearly a decade Keeley has revised his compressor design and produced a circuit that stays true to the original, yet excels in modern versatility. At the lowest price yet, the Compressor Plus has something to offer everyone whether you're on stage or in the studio.

The first ever Keeley Compressor (and his breakthrough original circuit) was the 2-Knob that gave you just Sustain and Level to play with. Next came the 4-Knob version which gave you additional control over clipping and attack. The Compressor Plus offers a much more user-friendly package that is even more versatile, and has a lower price tag.

The Keeley Compressor Plus aims to be the compressor for everyone, and as we've learned with Keeley products, it does just that. Keeley's compressor circuit is loved for its authentic Ross-type compression that has been the gold standard on stage and in the studio for many years. With the Compressor Plus Keeley sought to make a circuit that was less of a compressor "effect" and more of a compression tool. The major changes come in the form of added Blend and Tone controls and an attack adjusting mini-toggle. Here's the breakdown.

Sustain Control - This is the control that guitar players will pay the most attention to. Up to about 9 o'clock the effect is very gentle, with a slight smoothing effect. At those settings the volume and tone of your guitar stays even keel, and the peaks and valleys of your pick attack are not subdued but ever so gently evened. Between 10 and 12 o'clock is a sweet spot for brighter pickups like single coils or bridge position humbuckers. There is a small boost in volume as you increase sustain control, and you can edge the Level control off accordingly. If you are using the compressor for laying down big solos then boosting the Sustain produces a rich ring to any note you play.

Level - Self explanatory but once you have all the settings just right, this is how you balance input and output volume. The Compressor Plus actually has a slight boost in overall output which solves the age old problem of compressors draining the signal chain. No more cranking the Level as compensation.

Blend - This control is arguably the most important part of the Compressor Plus. It's nothing revolutionary but with the ability to mix in natural signal from whatever instrument you're using, you can control how much compression "effect" surrounds your tone, which was not available on either of Keeley's previous circuits. With the Blend control you can have peaks from dynamic playing come through the pedal all the while adding sustain on the back end.

Tone - The Tone control on the Compressor Plus is a design inspired from analog delay circuits, which ultimately acts like a low-pass filter. When you use a lot of compression the signal can become "squashed" and your high end can suffer a loss. With the tone control you can bleed treble back into the signal so it stays shimmering. This is especially useful when using humbuckers and other high output pickups.

Attack Switch - On the 4-Knob Compressor there was an attack dial but it became a control you had to constantly mess with if you changed guitars or more specifically changed pickups. On the Compressor Plus Keeley made it easier than ever with a Single Coil/Humbucker attack switch. Humbuckers are generally higher output so the notes stay compressed much longer, making them sound extra dense and dull. Now with a flick of the switch you can automatically adjust the release of the compressor so every guitar produces notes that are rich and full of sparkle.

After testing the Compressor Plus we are sure it's going to take the stomp box world by storm. It stands on the shoulders of the 2 and 4-Knob predecessors, and offers so much more in functionality. There are even preset samples on the control sheet that give you immediate blueprints for the most sought after compression sounds. Even if you're a player who has never seen the need for a "compressor effect" the Compressor Plus will enhance your instruments in a completely new way. This is a pedal you'll want not only for your immediate needs, but what it can do for you in the future. Keeley's previous compressor circuit has been awarded the Editor's Pick in Guitar Player Magazine and Reader's Choice for Stomp Box Compression. Countless artists and world class studio's swear by Keeley Compression. Find out why today.