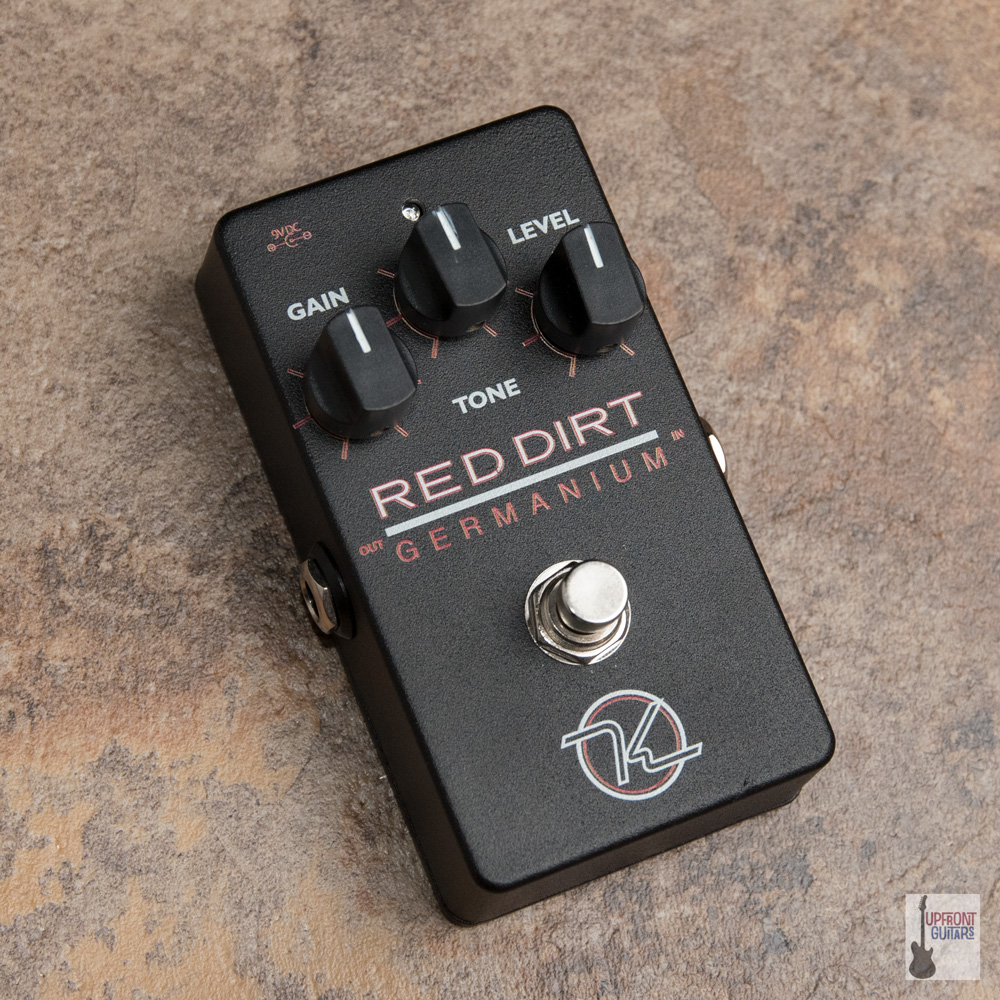 Back in production is the coolest member of the Red Dirt family at Keeley Electronics: The Red Dirt Germanium Overdrive. The original Red Dirt was the culmination of a decade's work in finding the ideal tube-style overdrive that can work with any rig. Now he's modified the mod, creating the Red Dirt Germanium. Aside from the internally mounted Germanium transistor, the RDG also has a tweaked variable-drive circuit that creates a more touch-responsive overdrive than ever before. It's bold, it's creamy and deserving of a spot on your board.

The Red Dirt Germanium is a simple beast with just three controls: Gain, Tone and Level. No mini toggles or dip switches, but this pedal is far from a "set it and forget it" unit. This is mostly due to the main attraction on this ride: the Germanium transistor. Germanium transistors are like mythical beasts in the world of effects, as they were among the first transistors used in early boost and fuzz pedals. They were inconsistent in their quality but when you got it right, the tone was exceptionally rich and dynamic. The Germanium craze lives on today thanks to the legendary predecessors like the Maestro Fuzz-Tone, Dallas-Arbiter Fuzz Face, and the Dallas Rangemaster.

So what happens when you put a Germanium transistor in the heart of the world's best tube screamer design? It's almost like having two pedals in one, with the gain being your compass. With moderate levels of gain (from say nothing to noon) it still has a lot of the Red Dirt personality but with a rounder overall tone. The soaring high frequencies are all there but with a smoothness that can clearly be attributed to the transistor. As you keep pushing the gain, the saturation piles on until you're in serious fuzz territory. Yes, you can get miles of classic tube-overdrive out of it but it also has the real potential to one-up your favorite fuzz. We recently had the limited Keeley Holy Fuzz pedal, made with the iconic OC75 Germanium transistors, and with some heavy tweaking of the guitar tone knob got the RDG to sound almost identical.

The other magical aspect of this pedal is it's touch sensitivity. As we said, Germanium transistors are known for this characteristic ,but Keeley also altered the drive circuit in this pedal by achieving "variable gain on different parts of the frequency response". We understand that it plays a big part in the harmonic content of your signal, contributing to the fullness of the base tone and the superior sustain. This "3D" like projection allows for the transistor to exaggerate it's dynamics, resulting in a single note producing several unique sounds depending on your picking technique. Finger pickers will have a blast playing one or two notes and bends for minutes on end, trying to hear every layer of sound.

We originally picked up this pedal because of our love for the Red Dirt, not really giving the Germanium thing much thought at all. We're not even real fuzz fans so there was even a little hesitance. However the combination of the two proved to be outstanding, and even made some of us rethink our opinion of the fuzz effect. This overdrive offers searing fuzz-inspired tone with enhanced harmonics and sustain. Try it today.