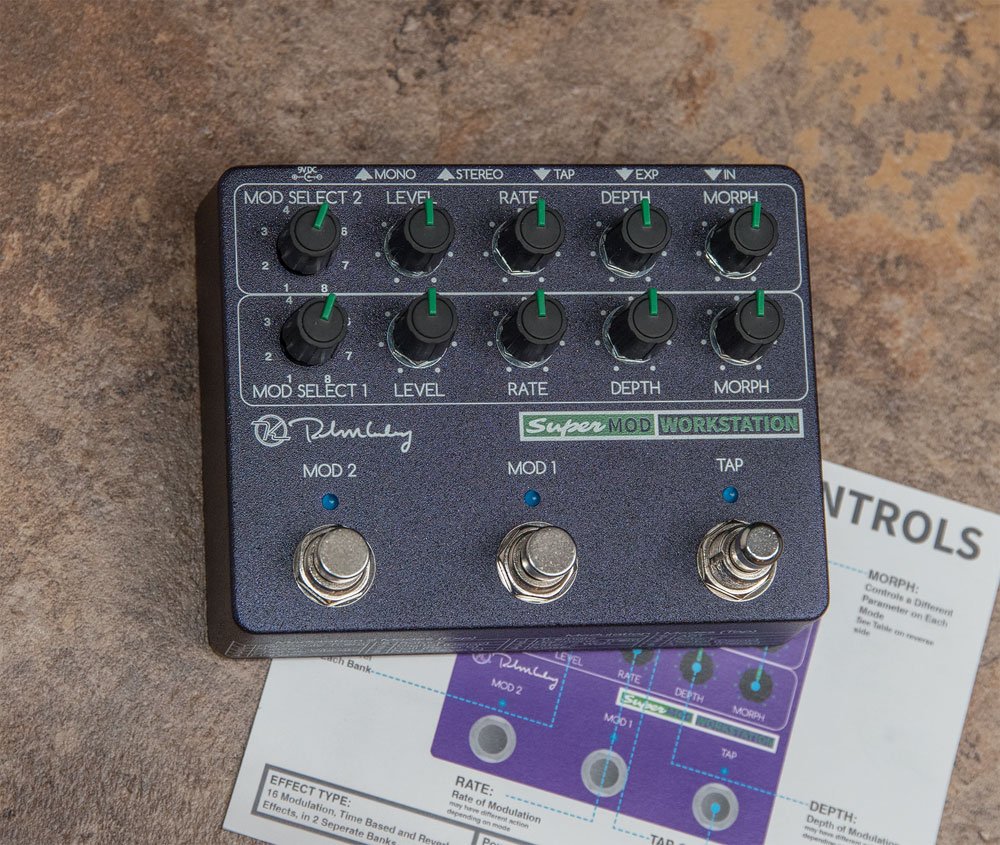 The Keeley Super Mod Workstation is a 16-in-1 pedal that gives you two banks of modulation effects, built in tap tempo and external expression for bank 2. With the best in Keeley's modulation, delay and reverb, the Super Mod is a bit like a revolving door of boutique effects, giving you endless room for experimentation and sonic exploration. It's the same size as their other workstations -- if you can believe it -- so if you want simplicity without compromising tonal exploration, the Super Mod Workstation is for you.

The Keeley Mod Workstation truly is the "everything" pedal for modulation, but it is extremely user friendly and easy to dial in your sound. Every Keeley pedal comes with a helpful instruction guide; but note that I included the role of the Morph knob which acts as Tone, Shape, Depth or Delay depending on which setting you're using. You'll also notice that there are effects found on both banks of the Super Mod, which is designed for you to be able to stack Keeley's most iconic sounds without compromise. Tweakers rejoice: There's no end to the fun. Here's the breakdown:

1) Tremolo: This is your throbbing volume tremolo. The tone is rich, warm and you use the tone control to change the waveform from triangle to square and anywhere in between.

Morph - Changes the shape of the wave from Triangle at left and continual blend to Square at the right.

2) Harmonic Tremolo: You've got your Black Face trem but what about the Brown Face? This setting cuts your signal into separate treble and bass paths, then uses LFO's (low frequency oscillators) to modulate the signals slightly out of phase with each other. The result is reminiscent of the crisper and harmonically rich tremolos from the 60's Brown Face amps.

3) Oscillating and Random Filter: This is one of the most fun effects on the mod workstation and you can see it in full bloom on Keeley's Bubbletron Filter Pedal. Essentially it is a low frequency oscillator that bleeds into an envelope filter as you adjust the tone control. With subtle amounts of envelope it is like a vibe or autowah effect, but as you increase the oscillation it becomes a random filter. Keeley notes inspiration from the Maestro pedal Frank Zappa used on Ship Ahoy.

5) ADT: If you haven't heard of Keeley's Automatic Double Tracker it is a "true chorus" emulation of the recording method pioneered by John Lennon at Abbey Road Studios in the 60's. By oscillating the speed of a second tape recorder and playing it back in sync with the original vocal or instrument, the sound image grew to mimic a true double track/chorus effect. Depth control adjusts the delay time of your two voices up to 60ms, the Rate control adjusts the tuning of the voices up to 60 cents and Tone control functions as a blend with your natural guitar signal.

6) Leslie Rotary Speaker: It's pretty much every players dream to have a roady schlep around a giant rotary cabinet but most of us are playing licks in our bedroom so what's a guy to do? Keeley's Leslie emulation is pretty spot on and features a drum - horn blend in the tone control that let's you adjust the sound of the "cabinet" just like on the real thing.

7) Digital Delay: 24 bit DSP powered digital delay. Clean, transparent repeats with seemingly endless delay times. If you like the sound of the old Boss DD3's then you'll like this even more.

8) Analog Delay: Bucket Brigade style delay. Deep, rich repeats that have a textured, gritty decay to them. It might not make you forget about a Memory Man, but it is as real as anything out there.

3) Analog Chorus/Vibrato: In addition to "true chorus" Keeley also gives you the Bucket-Brigade chorus effect that most people are familiar with. This is a process that sends your signal into a sequence of capacitors one by one, producing an analog delay which turns into the layered voices in the chorus. The tone control acts as a blend where anything up until noon is pitch vibrato and as you increase clockwise it becomes analog chorus. Rich, watery vibes for days.

Morph - Negative feedback at left, none at center, positive at right

7) Hall Reverb - Just like it says: Ambient, dimensional and downright ethereal if you want it to be. It adds mostly to the back end of the mix while letting your notes sparkle on top. The spectrum can simulate a great live room, spacious hall, amphitheater or the endless space-time continuum.

8) Plate Reverb - This style of reverb was one of the first artificial reverbs to get heavy usage in major studios. It's characteristics are fairly close to a reverb chamber but with obvious differences due to the density of the materials causing the reverberations. Keeley's plate reverb has shimmering high end response, with an almost metallic feel and also dense bass reverberations.

Multi-effects pedals are always somewhat of a gamble because they beg the question of, "How good can all this really be?" In that respect, the Keeley Super-Mod Workstation is in a league of its own. His work stations are smaller than any combo pedal we've come across, while delivering more quality sounds than anything on the market. If you want to modify your pedal board for simplicity without compromising tonal exploration, the Super Mod Workstation is there to lead the way.