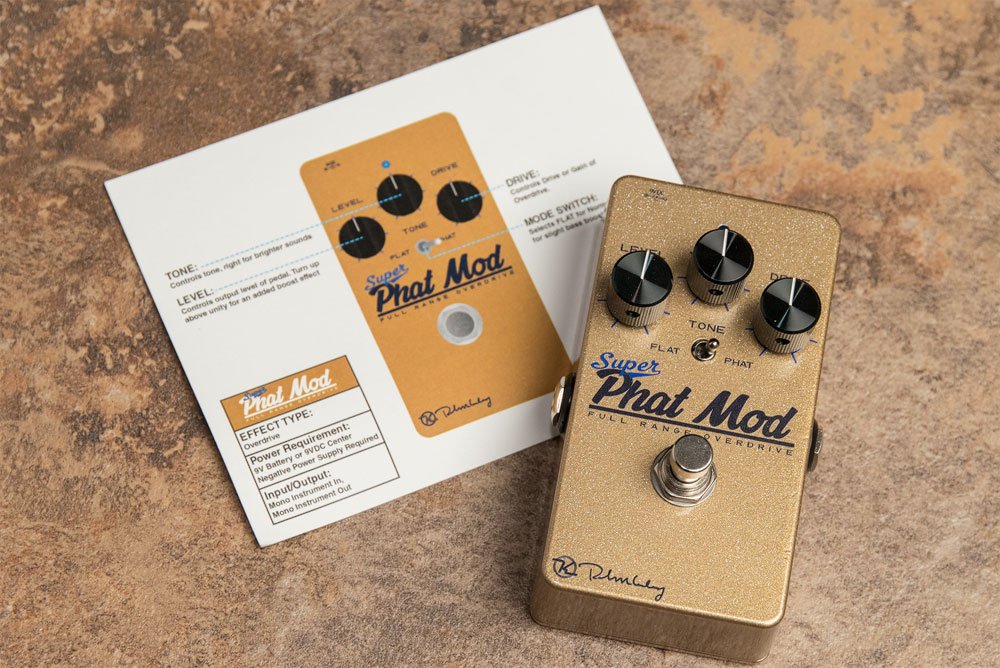 Introducing the Super Phat Mod Overdrive from Keeley Electronics. Like his Red Dirt Overdrive, the Super Phat Mod Pedal is a new and improved incarnation of an early modification that helped put Keeley on the map. In this case the inspiration comes from the Boss BD-2 mod where he added a bass boost to give balanced tube-style overdrive to any set of pickups. Combined with his super JFET booster, the Super Phat Mod has the rich harmonics and increased dynamic range that might make it a worthy successor to the original.

When describing many Keeley effects it's impossible not to mention his early days as a modification wizard. Most people know about his Tube Screamer mods but one of his oldest and most popular tweaks was the "Phat Mod" on the Boss Blues Driver-2. This was his first mod to feature a mini-toggle switch, offering a bass boost to fatten up single coil guitars. This mod was such a success that Keeley figured he ought to perfect the design and make his own platform, much like the Tube Screamer mods turning into his Red Dirt pedals. First came the Luna Drive which was a pretty big hit. Back in the lab it was further refined into the beloved Katana Blues Drive. After stripping the active treble and bass controls and hunting for the perfect JFET's, the final incarnation was born: The Super Phat Mod.

The controls on the Super Phat Mod are simple: Level, Tone, Drive and the Phat Switch. Transparent boost has always been a part of the Super Phat pedal so we learned right away that this thing can get LOUD. Like his Katana clean boost and White Sands pedals, the boost is a lot more than just volume and blending the gain knob in at various amounts is where the magic happens. It should be noted that this is a pretty bright pedal to begin with, so you'll probably find yourself doing some exploration of the controls to find your sweet spot.

At low levels of gain the SPM is a wonderful transparent boost that is easily pushed over the edge with pick attack. The refined JFET boost circuit keeps everything crystal clear even as you push the gain so your natural signal is never overshadowed. Running the guitar gauntlet on this pedal reveals a virtual palette of tube-style overdriven tones. There is a wonderful lack of "color" in the pedal so different rigs will have their own unique responses.

Phat Switch - The phat switch is a bass boost that was part of the original BD-2 mod. It's described as "subtle" but it turned out to be quite powerful. You won't want to turn it off while using single coils and it can add some musical muscle to a bridge humbucker. It's a nice feature on a great pedal that can earn a space on a lot of boards.

With Keeley electronics versatility is often the name of the game, and the Super Phat Mod lets you have the best of both worlds: vintage tube-like overdrive and unabashed transparency. If you're looking for an overdrive that will help find your sound, the Super Phat Mod will provide.