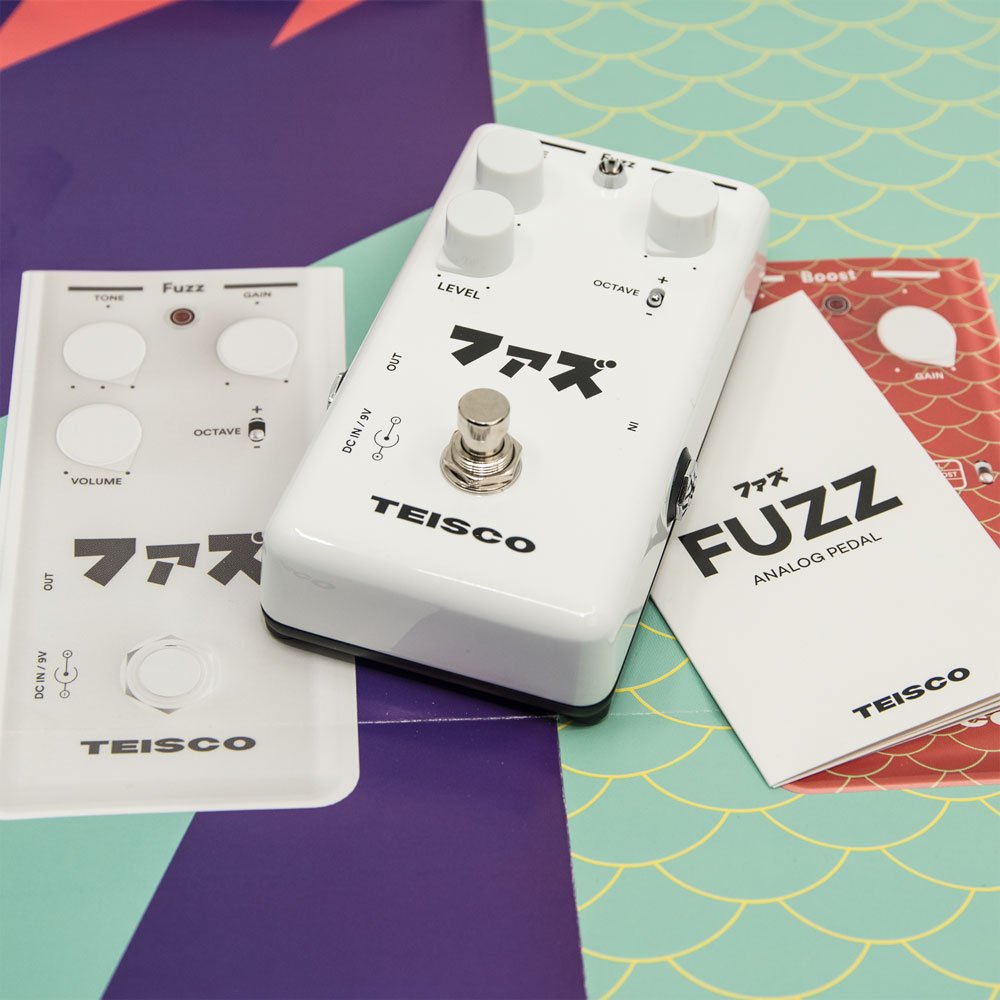 Our latest fun find at NAMM is the return of Teisco! That lovable quirky brand from the 60's is back with the same funky vibe, and a great new line of analog effects pedals. The Teisco Fuzz is a powerful silicon based circuit that offers a variety of tones ranging from classic '70's dirt to a glitchy synth, complete with a switchable high octave. With simple master controls and the octavia function this pedal is worth its salt in performance, versatility and affordability.

In this day and age, when it comes to fuzz pedals there is a single debate that divides builders and players into two camps: Silicon or Germanium? This is referring to the type of transistors used in the circuit that produce the snarling textures we've come to know and love. The very first and now legendary fuzzes (Fuzz Face, Tone Bender, Arbiter Fuzz, etc.) were all Germanium based and like many aspects of music manufacturing, the components that are now mythical were at once cheap and easily mass produced. As technology advances, innovation is received with equal parts praise and disgust. You see this with tube amps, PAF pickups, nitro finishes, etc. Someone will always ask "Why would you change something that was already perfect?" Luckily, people with an engineer's heart and creative enthusiasm rarely feel the need to answer that question. Enter the silicon transistor. You may have heard of one of its first mainstream applications: The 1969 Big Muff Fuzz by Electro-Harmonix.

In the late 60's it was discovered that silicon transistors were far more reliable components than their germanium peers, which were temperature sensitive and prone to variation in tone depending on the environment. The initial trade-off was that the germanium sound was rounder and smoother, while the silicon transistors passed through more treble frequencies giving the overall tone a more intense grind and attack. Fast forward to today: While many boutique pedal companies offer both styles, as the supplies of high quality germanium transistors dwindle, designers have gotten very creative exploiting the potential of the silicon transistor.

The Teisco Fuzz uses a sleek layout and effective controls to separate itself from the ever-growing field of silicon fuzz pedals. The master controls are familiar: Level, Tone and Gain. Fair warning, this thing is can get loud. Yet no matter how much grit you want to dial in, the Tone control is your guiding light. This will shape the texture of the fuzz from smooth, fat Muff-style tones to searing buzz-saw attack that can easily masquerade as a synth. To make this fuzz really stand out they added a high octave switch that gives you that classic Octavia sound with a sweet envelope style trigger. Overall the Teisco Fuzz is a bold, super-powered fuzz that is designed to blend sonic exploration with the sound of "the good ol days", and for a price that's hard to beat.