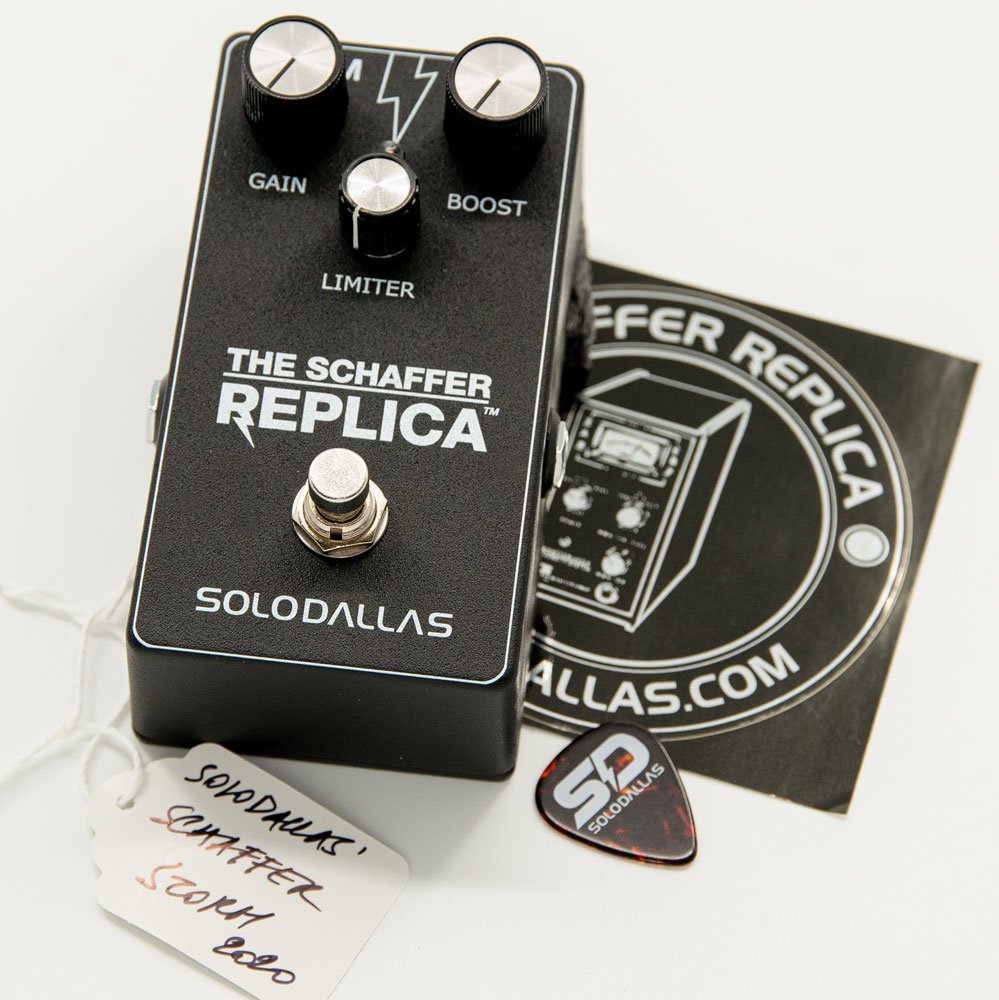 The Solodallas Storm is designed to give you the same "Instant Angus" tone as the TSR Replica pedal in a smaller, more pedalboard friendly 9V package. It's still awesome, but how does it compare to the original Solodallas TSR pedal?

First released back in the 2015, the original Solodallas Schaffer Replica pedal (TSR, or "The Schaffer Replica") was an instant hit with tone hounds. It's the brainchild of Filippo (Fil) Olivieri, guitarist, collector, blogger, and lover of all things Marshall, AC/DC, and Angus.

Here is the quick back story: The Schaffer wireless system was developed in the 70's, and used some ingenious compression and expansion techniques to boost the dynamic range of the transmitted signal to well over 100 dB. This "companding" circuit plus line buffering created impressive dynamics and clarity. With the addition of both input and output level controls, guitarists discovered that the Schaffer transmitter could also act like a signal boost. Bingo! It may have been a wireless transmitter, but guitarists loved what it did to their tone...and one of those guitarists was Angus Young.

So along comes the TSR pedal, and players everywhere are loving it. It's not a distortion pedal, and it's more than a signal booster. I would describe it as a signal booster and signal conditioner. The signal conditioning part being the compression/expansion circuitry along with a line buffer, which helps reduce signal degradation due to cables and other effects. The Solodallas makes any amplifier "pop," enhancing the spaciousness and "bigness" of the signal. Think of it as a very effective presence control that makes the sound fill the room -- rather than just come from the speaker -- without it actually being louder or brighter.

But the original TSR pedal had a couple perceived -- or actual -- drawbacks: It's a little large, and it requires a 12VDC tip positive power supply with a fairly high current draw. So the sound is dynamite, but unless you haul a separate power supply, it's not necessarily a drop-in device. So the gang at Solodallas went back to the woodshed, and out comes the 9VDC tip negative Solodallas Storm. And it's also 9V battery compatible.

So the Storm brings "Instant Angus" to every pedalboard. But how does it sound, and how does it compare to the original TSR?

Running them side-by-side into our Dr. Z Remedy our first impression is that the Storm has a little more natural brightness, while the TSR has more of a slightly darker, more forward midrange push. At first the Storm might sound more compelling because we are naturally inclined to like brighter sounds, but the original TSR sounds a touch more substantial. That being said, single coils sound great with the Storm, with lots of tasty definition and a tactile feel that goes to relative mush when you turn it off. It's not just brighter, it's better, plain and simple.

Keep in mind at this point we are testing the pedal so that it is not increasing the gain or volume of the amplified sound. We are just judging the sound quality of the device. The Storm will happily push the front end of your amp or other effects, and our "Z" takes very well to the kick that the Storm can provide. While we don't own a Marshall, the Remedy is "Plexi-like" and to our ears does a marvelous job of producing our own little slice of Angus. Both the "Power" and "Storm" controls (compression and expansion) have an effect on overall signal output, and we tend to adjust their levels in parallel to trim the overall output of the device. To our ears the Storm has a little more total boost capability than the TSR, which is already considerable.

The "Snap" control is new to the Storm, and it acts like an overall compressor/limiter. Run it at low levels and there is more natural attack, more bite, and little crisper edge. At higher (clockwise) levels the sound is smoother and a little more compressed. It's a matter of taste, and we liked it at around 11 o-clock where it preserved the "snap" and spaciousness around the notes, but with a touch of smoothness.

We like the Storm (or TSR) last on our board, where it can act as a buffer, and where it also greatly enhances the tone of any gain pedal. Doing some A/B tests fed by our Lovepedal Kalamazoo, the Storm responded in a slightly different manner than the TSR. The gain tones of the Storm were a little smoother, more evenly balanced, and with a wide swath of harmonics across the entire frequency range. As with clean tones, the TSR had the same kind of midrange push, with a little a little more crackle and bite. You might say the TSR is a little nastier sounding, and does a slightly better pissed-off Aussie crunch.

Is there a winner? Both pedals qualify as "always-on" products, and we've previously described the TSR as "Sonic Crack." Once you hear how either device uncorks the tone of your amplifier, you won't turn it off. Personally we think the Storm is a little better at clean-to-semi-clean tones, while the original TSR has the slight edge at full-tilt crunch. But in terms of packaging and take-anywhere convenience, the Storm has a clear advantage.

The Storm takes away any excuse not to have "Instant Angus" on your pedalboard.