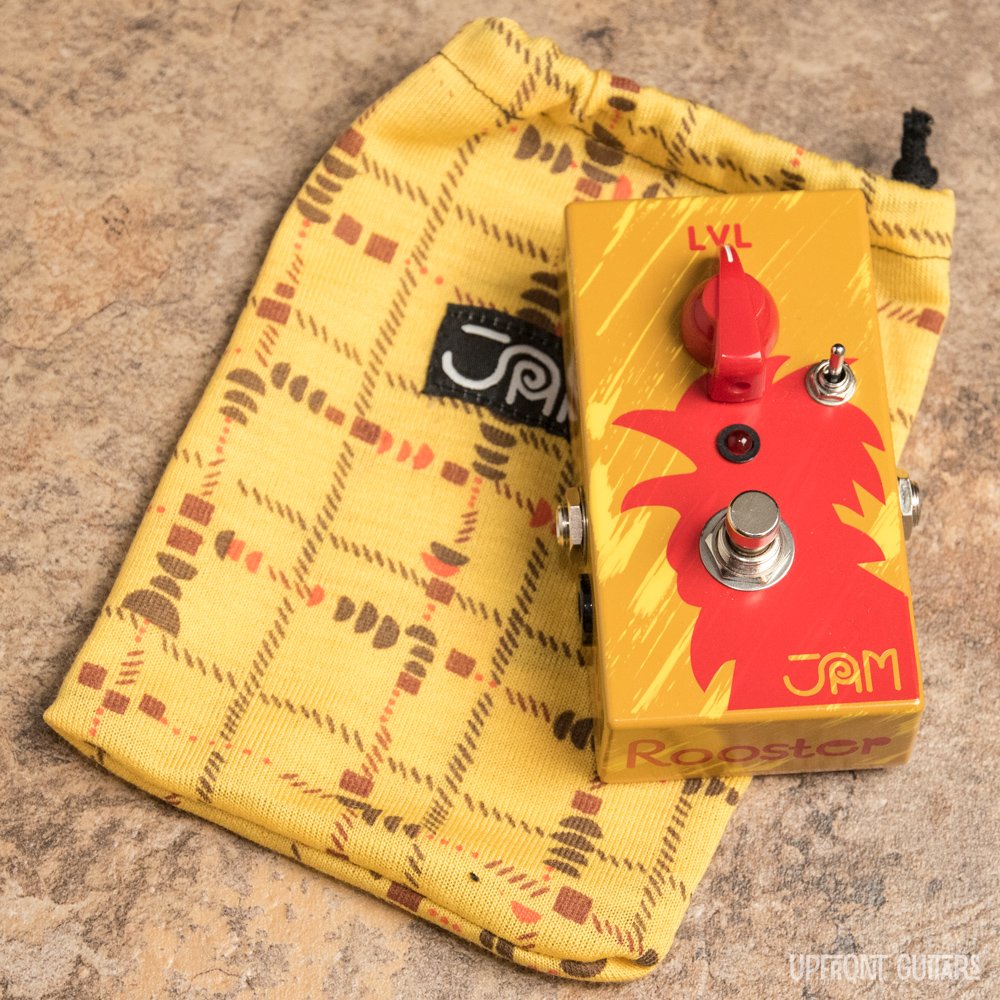 Introducing the Rooster Treble Booster by JAM Pedals. This germanium powered unit harnesses the sounds of the groundbreaking 60's rock scene, most notably across the pond in Britain. Simple but effective, treble boost effects were created to send tube amps into hyper-drive while giving the guitar tone a focused high end presence. The inspiration for the Rooster comes from pioneer devices like the Dallas Rangemaster, Hornsby Skewes and Vox Booster, but JAM differentiates themselves by using a rare military spec CV7003 - OC44 germanium transistor that is made to withstand the temperature issues that have plagued even the best pedals from the early days. They've also upped the game with a 3-way toggle selector that lets you choose a bass, mid or treble frequency bump, giving this one-knob pedal a surprising amount of tonal versatility. Each JAM unit is hand-assembled and painted in Athens, Greece. Some of the best guitarists in the world swear by JAM Pedals - come find out why.


The Rooster is available with point-to-point wiring for a mere $ 55 added cost. Ask us about special orders!

While the effects market is intensely saturated with new products being released constantly, a few manufacturers stand out, and one of those is JAM pedals. And the proof is in their artist roster which includes: John Scofield, Julian Lage, Bill Frisell, Nels Cline, Kirk Fletcher, Steve Lukather, Greg Koch, Daniel Lanois, Dweezil Zappa, Kenny Wayne Shepherd, Andy Timmons and many more. Now wake up, the Rooster's calling.

Treble boost circuits are one of the earliest guitar effects and at the core, were really a pragmatic device. It was meant to send warm tube amps into a frenzy, creating an overdriven tone that focused and pushed high end frequencies. This not only made the guitar cut through the mix better than anything but it also created an unmistakable sound that would become legendary thanks to the rock n' roll movements of the 60's. Let's drop a few names to make it clear: Eric Clapton (the Bluesbreaker days especially) Tony Iommi, Brian May, Ritchie Blackmore, Rory Gallagher, and the list goes on mate.

While there were quite a few big name boosters back then, the Dallas Rangemaster shines the brightest light on the path from the past to the future. It was not only one of the earliest booster creations but it was also the primary device for most of the guitar heroes mentioned above, in particular Tony Iommi, Brian May and Rory Gallagher. The legend was a simple machine consisting of a single volume pot, one transistor, 4 capacitors, 3 resistors and a battery which begs the question: Where did the magic come from? While one could start a lengthy debate here, that single transistor is known as the secret ingredient and people have been chasing them ever since. The original Rangemaster supposedly used one of two transistors: the Mullard OC44 or OC71. As the world of guitar effects blew up this component gained its royal status by showcasing its powers in early fuzz creations from the Vox Tone Bender all the way to boutique fuzz boxes of today.

Fast forward to the 21st century in Athens, Greece the engineers at JAM pedals got their hands on a slew of ultra-rare military spec OC44 transistors. Also known as the CV7003, this component was hand picked because of its ability to withstand heat, which was an issue that germanium transistors had since the beginning. It would literally change the sound of your pedal depending on temperature. For professional and amateur players alike this was obviously a huge problem, especially if you're touring the country bouncing between climates. Another major improvement to the classic booster circuit is their 3-way toggle switch that allows you to push bass, mid or treble frequencies into the foreground. Back in the early days companies like Vox and Hornsby Skewes made treble and bass boosters because guitarists needed the flexibility to take their tone in the other direction. On the Rooster you get three unique boost voices which is especially helpful when you're switching between single coil and humbucking guitars or even different amps. Other than that the Rooster is pleasingly authentic with only the level knob setting your course for tonal bliss.

The Rooster gives the word "boost" a new meaning. It's a combination of volume, presence and harmonic complexity that gives your sound a cutting edge that won't take the heads off your audience. Even if you don't live on a farm, this is one Rooster you won't mind waking up to every day.