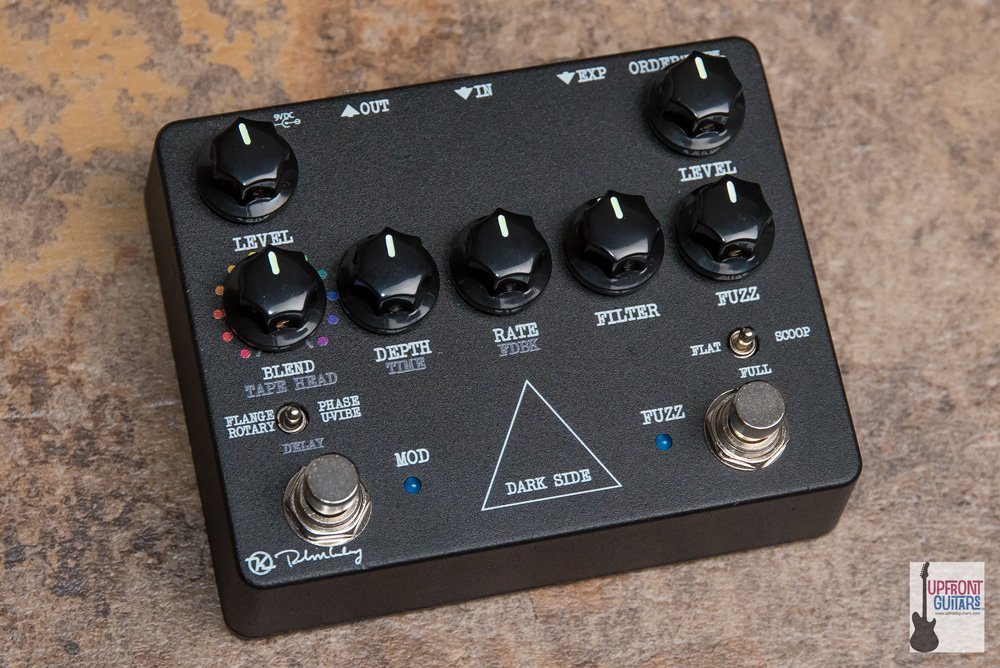 The Keeley Darkside is another brilliant box of subversive modulation effects and killer fuzz from Robert Keeley. With an obvious trail of inspiration coming from Pink Floyd's guitar hero David Gilmour, the Darkside offers a fully customizable fuzz circuit alongside 4 modulation effects and multi-head tape delay. Everything in the Darkside runs off a handbuilt 24 bit DSP so the effects are rich, textured and guaranteed to take your tone to the other side of the moon.


We are often befuddled with how many controls an effects box throws at you, but the Darkside is incredibly intuitive and has the same petite chassis that Keeley's other workstations employ. There are two "sides" to the Darkside, one being the roaring Fuzz circuit, and the other being the Modulation and Delay sounds. The pure amount of experimenting one could do with this pedal is virtually limitless, so we approached our testing with a first, second and both method. Bonus features to keep in mind: Expression Pedal Input for precise modulation control and an Order Switch giving you the option of which circuit comes first.

The Fuzz circuit on the Darkside is an op-amp (operational amplifier) design that was inspired by the "Big Fuzz" tones of the late 70's. Compared to other op-amp fuzz circuits -- even Keeley's own -- the Darkside has less gain so you hear more of your true guitar tone. Now whatever they consider "less gain" don't be fooled: This fuzz is packed can dish out heavy saturation but with an unparalleled smoothness. You also don't just get "a fuzz"; there is complete control over the tonal profile. The controls are:

Level - Controls how much you value your hearing

Fuzz - This is pretty much a saturation control. All the way from gritty, radio static-esque breakup to a dense wall of fuzz.

Filter - This is a Muff-style tone control or in this case high-pass filter. We encourage you to explore this control because you can dial in a lot of bass response without the signal falling apart and turning to mud. If you want to shake the stage, turn the dial.

Body Toggle - The mini toggle control doesn't have a name but Body Toggle seems fitting to us because it gives you three fuzz "shapes" to choose from: Scoop, Full and Flat. Scoop carves out some midrange muscle for a very tight, articulate fuzz that is an excellent compliment to humbuckers. Full is the go to, old-school Muff tone that will give any guitar instant authority. If you're rocking an S-type guitar, this setting is instant Gilmour. Flat is a midrange focused fuzz that will cut through any mix, but without getting harsh, even on a bridge pickup.

The second half of the Darkside has two functions: Multi-head Tape Delay and Modulation. The Delay has 12 different syncopated delays and they are dripping with analog warmth and ambiance. Keeley put in numerous filters to give you an authentic emulation of the spinning drum delays that Gilmour used on the original Binson Echorec.

The Modulation effects are classic 70's and particularly Gilmour tones: Flange, Rotary Speaker, Phaser and U-Vibe. Perhaps the coolest aspect of the Darkside is that these effects are coupled together and controlled with a blend knob. This means that you can have your Flange, your spinning Leslie, a little of both, a lot of flange with a little Leslie, a wild leslie with a little flange and so on. With the Darkside it's easy to get exact Gilmour tones or create entirely new ones that are ready to be claimed. The controls are simple and effective:

Level - How much your effects compete with the Fuzz

Blend (Tape Head Selection) - Select an effect or a combination of the two. When in delay mode this is your tape head selection, with all 12 syncopations marked with colorful dots.

Depth (Delay Time) - This controls the depth of your modulation or the length of your delay depending on which mode you're in. You will be ever impressed by the ability to turn any effect into a lush, ethereal accompaniment.

Rate (Delay Feedback) - Each mod effect can be a slow, swiriling atmosphere or a wild chatter of cosmic noise. When in delay mode this is your feedback control, which can make for some intense noise effects.

While this box will be an instant hit for Gilmour fanatics, it has the potential to be anyone's favorite workstation. If you like Fuzz in general, this whole package is a no brainer, and not even close to the size of a traditional Big Muff. If you want old-school guitar effects with analog richness this is the perfect way to get more than you bargained for. The Darkside deserves the attention of any guitar player looking to craft their own sound with classic effects.