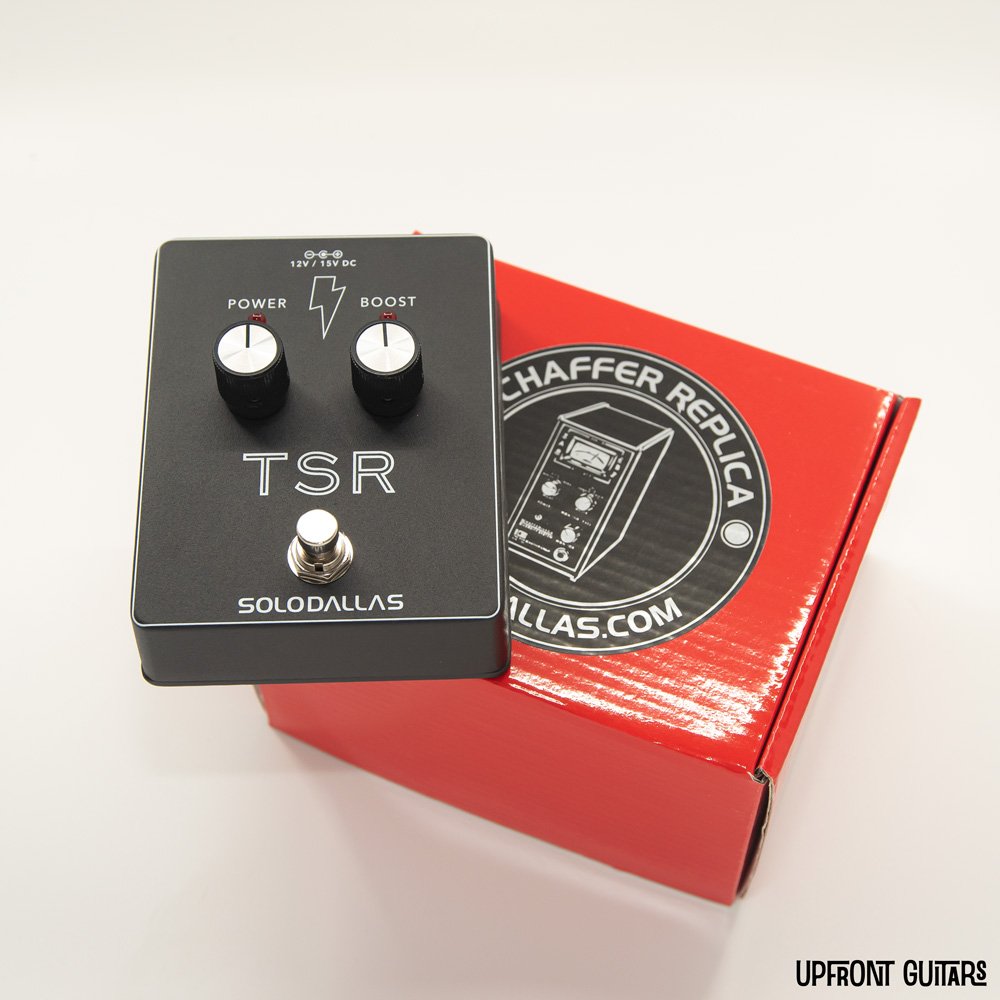 Note: Includes a 12VDC power supply which is center positive. Most adapters and power supplies are center negative, so check first before hooking up to other power supplies.

The Solodallas Schaffer Replica™ pedal is heralded as the "sound of AC/DC" by both guitarists and reviewers alike. It's more than just "Instant Angus", it's a noticeable and worthwhile sonic enhancement for any rig or style of music.

In brief - or relatively brief - the Solodallas pedal is a replica of the signal processing section of the Ken Schaffer wireless guitar transmitter. The Schaffer wireless system was developed in the 70's, and used some ingenious compression and expansion techniques to boost the dynamic range of the transmitted signal to well over 100 dB. This "companding" circuit plus line buffering created impressive dynamics and clarity. With the addition of both input and output level controls, guitarists discovered that the Schaffer transmitter could also act like a signal boost. Bingo! It may have been a wireless transmitter, but guitarists loved what it did to their tone...and one of those guitarists was Angus Young.

Fast forward many years of work, and Fil Olivieri  the founder and creator of Solodallas brought forth the Solodallas Schaffer Replica. So what is it, and what can you do with it?

First off, it's not a distortion pedal, and it's more than a signal booster. I would describe it as a signal booster and signal conditioner. The signal conditioning part being the compression/expansion circuitry along with a line buffer, which helps reduce signal degradation due to cables and other series effects. The unit has an input control which controls input sensitivity and compression level, and an output control that sets the amount of boost. Along with a 12 VDC power supply, that's all there is to it.

We tried the pedal in conjunction with a number of different amplifiers and guitars, and while we don't own a Marshall Plexi, our Dr. Z Remedy is "Plexi-like" on a smaller scale. We also tried it through our modded Fender Bassman Reissue, and a Traynor Custom Valve 40, a relatively high-headroom 1x12 combo.

Call it what you will -- presence, harmonic richness, high definition -- but the Solodallas makes any amplifier "pop," enhancing the spaciousness and "bigness" of the signal. Think of it as a very effective presence control that makes the sound fill the room -- rather than just come from the speaker -- without it actually being louder or brighter. If the amp is on the edge of breakup, the Solo Dallas can be set to push the signal a little more to make the crunch more harmonic and complex. It's not producing its own distortion, but making the amp's distortion more interesting and tactile.

Setting the controls pretty much at unity and using our Knaggs Kenai (closest thing we have to an SG) with the Dr Z, we got a close approximation of what we might term our "Angus Tone". Bright, with lots of complex crunchy detail, tons of texture, but not gobs of distortion. We could increase the output control to drive the amp a little harder, but we got the effect we were looking for without really increasing the overall volume. Using it with a brighter setup like a Tele/Bassman did not produce painfully sharp tones, but widened the sound-stage giving the Tele a deeper more dimensional presence. Bypassing the Solodallas was like flipping on the lights at a make-out party: Total mood killer.

Because the Solodallas works in conjunction with the input sensitivity of your amplifier, headroom capability and other factors, not every amplifier will become a raging Angus Machine. It can easily push a lower headroom amp like the Bassman into some nice soft crunch, whereas a higher headroom amps like the Traynor befitted via deeper and more tactile sound-stage, but the tones stayed relatively clean.

The Solodallas is like Sonic Crack: You won't be able to turn it off. We put it at the end of our pedal chain where the line buffering would do the most good, and also so it's boosting capabilities would not inadvertently overdrive other effects. We found it worked great with our gain pedals too. Placing our trusty Lovepedal and Sparkle Drive in front of the Solodallas just opened them up more, improving their detail, touch sensitivity and sense of depth. Whenever we bypassed the Solodallas, it felt like our tone shrank several notches.

It's hard to find fault with the way the Solodallas makes almost any amp sound more alive and vibrant. The legions of Pros using the Solodallas continues to grow, and it's rare that a product comes along that makes everything sound better without changing the natural tone of your guitar and amp.

We are an authorized Solodallas Dealer, and for any questions regarding this listing please contact us. All merchandise is subject to prior in-store sales. Thank you for your interest.