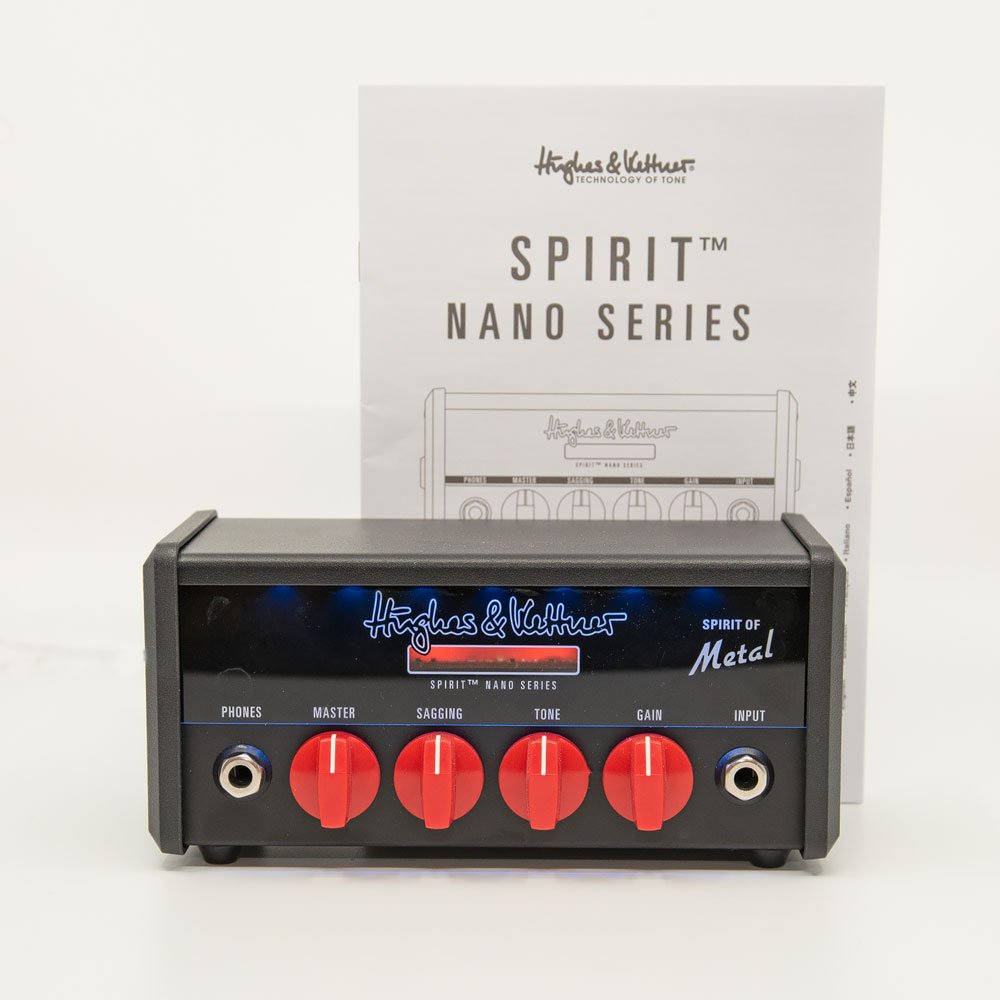 Honey, I shrunk the amp. Looking like an unintended outcome from a lab experiment, the new Hughes & Kettner Spirit of Metal Nano amp is no fluke. It's a fully functional 50 watt amplifier with H&K's Spirit Tone Generator technology crammed into a package that would fit comfortably in a backpack or glove compartment. This pint-size glowing blue box pumps out some furiously heavy tones through speakers or headphones,  making playing on the go easier than ever.

The Spirit of Metal Nano features:


There are three flavors of the Nano series -- Vintage, Metal and Rock -- and the Metal series is the mean spirited meat cleaver of the bunch. If you are looking for cleans choose one of the other models. That is not the swim lane of the Spirit of Metal. There are only four knobs, and jumping right to the gain control you will find that there is an insane of amount of available distortion and saturation. It starts getting pretty angry right around 3 o'clock and proceeds to go off the charts as you crank the knob. Not being metal-masters by any stretch, we really dug the tight crunchy hard rock tones available in the lower gain settings, but players whose realm is heavy stuff will be impressed at what this little box can squeeze out.

Helping to finesse all this gain is their Spirit Tone Generator Sagging control. This control the varies the degree of tactile response, attack, saturation, and what we like to think of as the "push-pull" guitar/amp response typically associated with a tube rectifier amplifier. The Sagging control gives the user the option of a "tight" attack response at one end of the dial to a progressively looser more compressed feel. In hard rock parlance, you can chug at one end the dial and sing like a violin at the other. OK, maybe the differences are not that dramatic, but it's a useful tool not only for shaping the your sound, but also how the amp responds to your playing style.

And did we mention that it's loud? After all it's 50 watts into four ohms, and while Class D watts are subjectively not as "loud" as a 50 watt tube amp, this is not just a bedroom buddy. You can practice with your friends, jam, or take it to a gig. There is a line out -- it's not a speaker emulation -- so it might need a little massaging into a mixer input. But the shear practicality of something this small will make you want to figure out how to run it into your mixer.

Other nice features include a headphone jack -- we asked, and no speaker load is required -- and a 3.5mm input so you can play along with your favorite songs. Yes, there is no reverb but the amp has a decent amount of natural shimmer, and at least for us we don't feel a great need for reverb at high gain settings.

One of the most compelling features of the Nanos is that they make it easy. No bluetooth pairing, no phone app, no scrolling through menus. Plug in, power up, play. Isn't that what we all want to do anyway? Technology is wonderful, but sometimes it's best when the product gets out of the way and lets us have fun. The Spirit of Metal Nano sets you free.