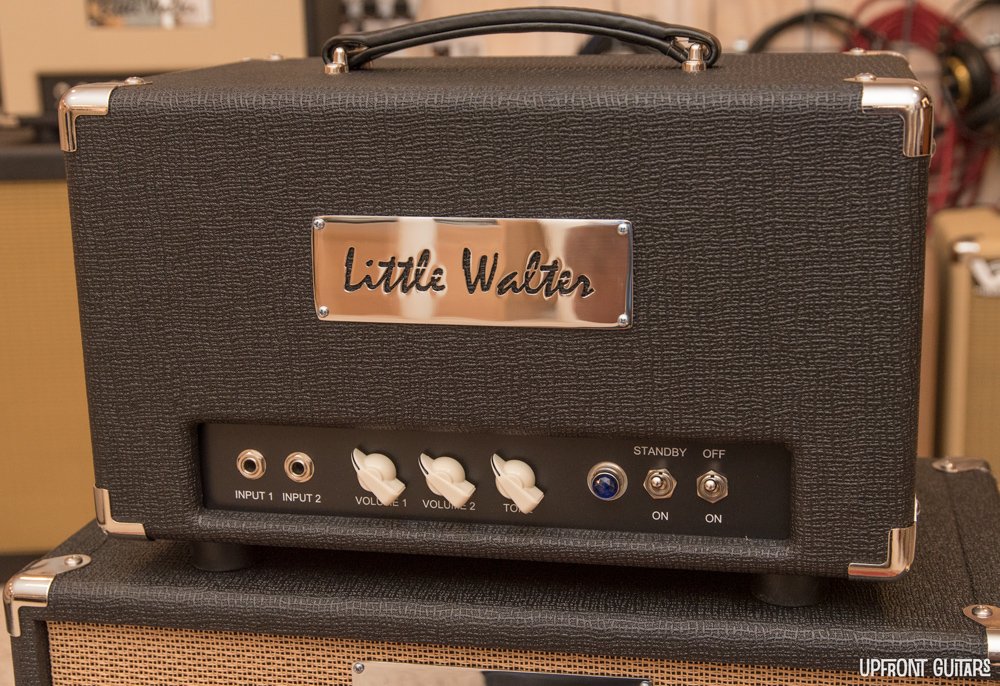 The Little Walter "22" is the hot headed little brother of the Octal 50. Sporting its 6SL7 and 6SC7 octal preamp tubes and two 6V6 power tubes, the 22 is designed to provide organic breakup at modest volume. Little Walter Tube Amps feature 100% point-to-point construction and top-quality components for outstanding touch sensitivity, and a range of tones from sweetly clean to raucous and gritty.

With a unique tube set, and Point-to-Point (PTP) construction, the Little Walter 22 is not your average head. Before the 12AX7 “miniature” 9-pin preamp tube was even invented, amplifier designers used the 6V6-sized 8-pin “octal” preamp tubes. While the 12AX7 has more gain – a important factor in the pre-PA days – the octal tubes run lower plate voltages, have significantly less gain, and produce a warmer, fuller tone than the smaller nine pin bottles.

The 22 also employs PTP construction, with the various components wired directly to the tube sockets, potentiometers, etc., without the use of a circuit board or other component platform. In the early days this was how amplifiers were built until eyelet boards, and ultimately printed circuit boards came along. While these methods improve assembly time and reduce cost, the circuit path and component selection can be compromised in the name of manufacturability.The Little Walter 22 makes no such concession to the constraints of modern assembly techniques and is built with the philosophy that carefully selected components, and the most direct circuit path is the key to great tone.

The cathode-biased 22 is a simple affair with just lo/hi inputs, independant volume controls and a universal tone control. The 22 Watt 6V6 model is in the mold of small amps of the 50's, and early 60's, and the allure of the 6V6 power tube is largely due to it's rounded tone and early breakup. However even the original Tweed's and Deluxes used Noval preamp tubes. Enter Little Walter to shake things up. The sound of the 22 is much like it's 50 watt big brother with key differences in functionality. At low levels the 22 is super clean and harmonically rich but there is an overt warmth that stands out. This of course can be manipulated with the tone control but "like a good 'ol Tweed" the tone control also affects the volume -- and clean volume -- a great deal. This is a lot of fun because both the volume and tone controls become shaping tools for your sound.

That being said, this is not the meticulous tone-hunter's amp. It packs a lot more volume than you'd expect, and if you work it hard, you will be rewarded with superior tube overdrive. The octals impart a smooth character, with great harmonic content that is linear in nature, and not "farty" or ragged like a small tweed. If you're a player who pushes the amp and relies heavily on your volume control, then this amp will blow you away. Wherever you are on the dial, the 22 responds to pick attack and nuance in a way that the amp becomes and extension of your playing technique.

While 22 Watts may seem on the lower end for gigging, the Little Walter packs a big enough punch to cover most bars and clubs. You may always be pushing a little crunch but you also may never need an overdrive pedal again. Provided that it’s not dimed, or that you don’t crush it with an extremely hot signal, the Octal series amps are also good pedal platforms. It sounds great with our matching Little Walter 1x12, and it really opens up with 10’s too. Paired with our Mojotone pine 4x10 with Jensen C10/P10’s, both clean and dirty tones have marvelous complexity, depth and character.

For rock, blues, country and roots, the octal Little Walter 22 punches above its weight class: It’s loud enough for gigs but does not need to be loud to sound good, works well with pedals but has its own musical breakup, and it can get down and dirty without losing all composure. If you want to get the most out of your guitar signal, Little Walter has got you covered.