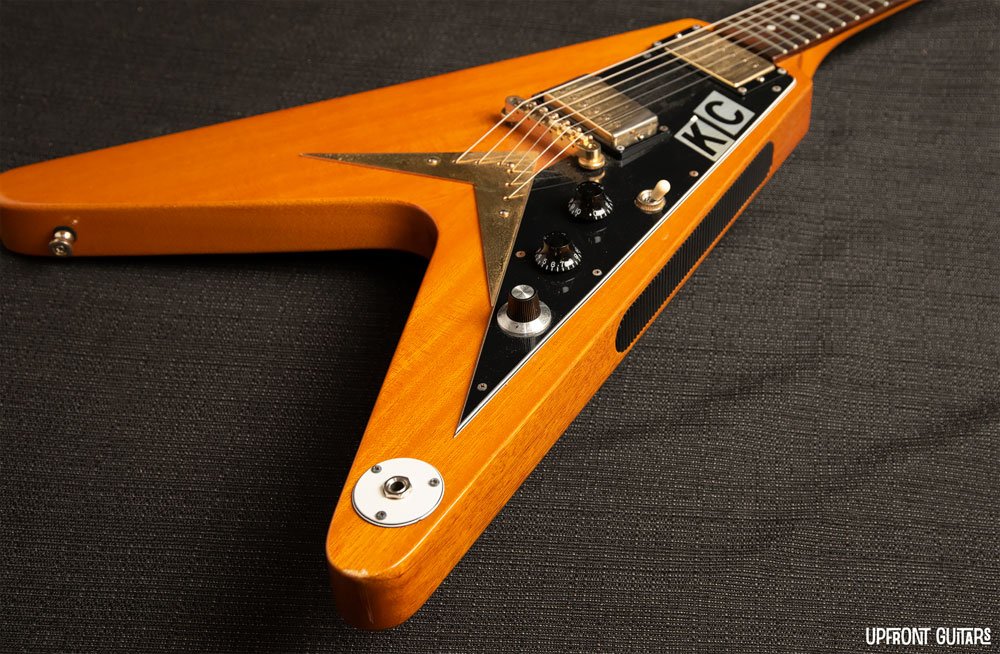 Joe Bonamassa has amassed an amazing collection of rare gear, including one of the first Gibson Flying V’s made in 1958. His ’58 V has been traced back to Arthur Amos’ Music Store in Indianapolis, IN. Radical for its time (and now) very few early V’s were made, and who knows how many survived. Epiphone made a painstaking recreation of Joe’s rare guitar for everyday players to get a taste of Gibson history.

This 2017 Joe Bonamassa Flying V is in very good condition. No fret wear to speak of, but there is wear and tarnish on the gold hardware. There are some “initials” stuck to the pickguard and one knob is non-original. Lots of stickers on the case. It’s been loved but not treated roughly.

In the late 50’s stodgy Gibson was trying hard to catch up to the more hip Fender and their curvy sexy designs. The Flying V may have gone a bit too far striving for hipness, and fewer than a 100 were made before Gibson put the kibosh on production (making it sort of the Edsel of the guitar world). But the “V” was conventional Gibson in most other ways including electronics, neck configuration, etc.

The Epiphone Flying V starts out with a nice two-piece Korina body, also known as Limba or African Mahogany. Korina is felt to have sonic properties similar to mahogany, and this particular example weighs in at only 7.4 pounds. The Alnico II ProBucker pickups are a moderate wind pickup constructed very much as they would have been back in the day. With the lightweight body and vintage-voiced pickups the Amos V is bright, clean and very articulate for a set neck humbucker. Korina tends to have less pronounced mids than mahogany, giving the V a lighter, brighter attitude than many Les Pauls. The softer magnetic pull of Alnico II also yields a creamy overdrive tone, with plenty of sustain and harmonics.

Another feature of the V was its flashy v-shaped string guide for the string-thru ferrules. The gentle break angle over the bridge and long string length gives the V a lower string tension than most other Gibsons. It’s got a slinky feel that bends easily and plays with very little effort. It’s a guitar that’s not going to wear you out.

If you bond with the looks, you’ll find a guitar that balances well, plays easily, has exceptional clean tones, and creamy, blues-infused crunch. Hardly the screaming metal image that gets associated with V-shape guitars. Gibson may have laid an egg in 1958, but in the eyes of history it has aged very well indeed.