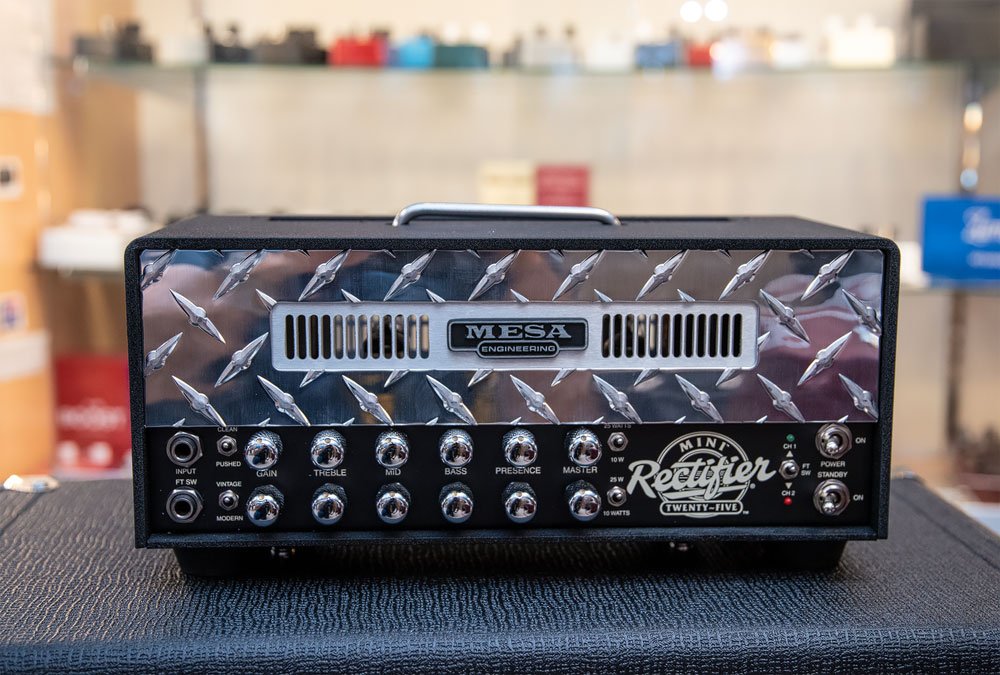 If this is a "lunchbox" amp, you can truly have your cake and eat it too. The Mesa Boogie Mini Rectifier 25w continues Mesa's legacy of jamming as much flexibility as possible into their amplifiers regardless of size. With two fully independent channels, multiple voicings and dual power modes, the Min Rec is a shining example of what Mesa does best...just smaller.


Spoiler alert: There is no rectifier tube in this "Rectifier" amp, as that would have been a bit much for this pint sized package. But Mesa lovers will be right at home with the feature set of this amplifier. Dyna-Watt technology allows for both full 25 watts of power or essentially a single ended class A 10 watt setting for a,more spongy vintage feel. Plugged into our Tone Tubby cabinet with Celestion G12H30, the clean channel put out some very respectable clean chime, not something you always get from a Mesa. The pushed mode is exactly that; a little more hair, presence and grind that works up to a full-on blues crunch. The lead channel is what you'd expect from the people that literally invented high gain, and we liked the vintage setting for it's wide range of crunchy rock tones up to full tilt classic arena rock. The modern setting does it's best to crank out tight, super saturated metal mayhem. And if you keep it on the 25W setting is does a pretty darn good job. Which is a good time to mention that where you have the wattage set does a lot to change the character of the amp. In essence it's really a four-channel amp, you just have to flick a couple toggles.

Mesa owned the backlines of many a hard rock and emo band in the 90's and 2000's. But time marches on, and even Mesa has adapted to the trend of smaller-is-better. Or at least smaller-is-necessary because that's what the customer wants. The Mesa Mini Rectifier 25 bottles the classic Mesa mojo into a super portable package that excels both at home and on the road.