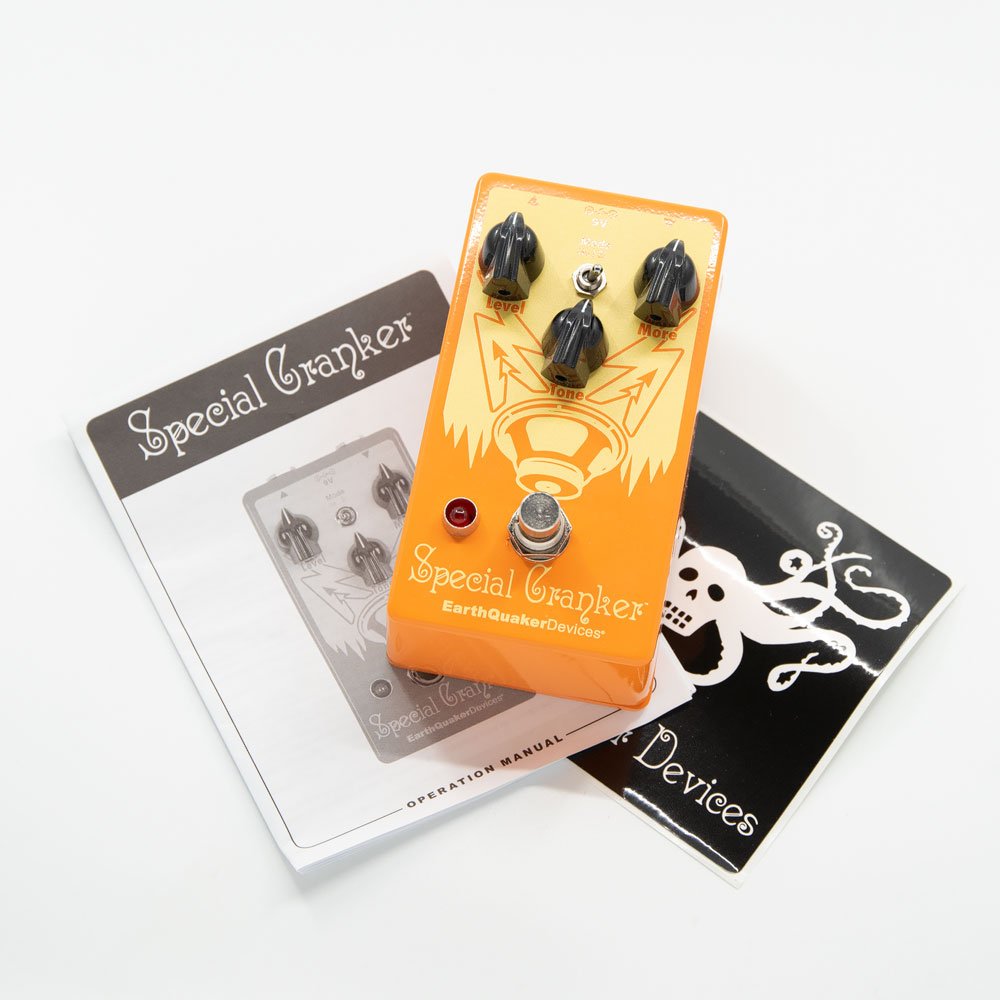 In the crowded space of distortion and overdrive pedals, you can be feature-rich, easy to use, or affordable. Or maybe all three. The new Earthquaker Special Cranker does a commendable job at the trifecta, and offers plenty of flexibility with just three knobs and toggle switch...at an entry level price.

The Special Cranker excels at providing light-to-medium levels of grit that will make you guitar go from lusciously textured to angry without trashing the tone you've worked to hard to achieve. That's it's happy space: And while you can dime the "More" control for some pretty gained up tones, it takes on more of a fuzz characteristic than a distortion pedal.

The tone control deserves special mention, as it's a true boost/cut control that is very powerful and musical. Oftentimes overdrives can create a level of brightness that is hard to tame. With the Cranker you can precisely add just enough warmth to give your tone a smooth feel without losing it's edge. For us it's the star feature of the Cranker, making it one of those always-on type of pedals

Lastly, the toggle switch gives you a choice of Germanium or Silicon clipping diodes. The Germanium is brighter and more detailed, while the Silicon diodes boost the mids and the low end more. We leaned toward the detail and harmonics of the Germanium while gently contouring it with the tone control.

If you simply plug this pedal in and "Cranker" it, you may miss the point. The Cranker is thrives in the not-clean-not-dirty world, giving your sound character, richness and texture without sounding like you have an "effect" on. Unless your go-to realm is high gain, for 99 bucks, it's simply a no-brainer.

The Special Cranker is an all-discrete analog distortion enhancement device designed to give your signal some extra grit and boost without drastically altering your tone and retaining all of the natural nuances and character of your amp. Think of it as sticking an extra preamp tube in your amplifier for more saturation. Single notes will blossom and bloom with rich harmonics and singing sustain with responsive, tube-like sag. Power chords will sound thicker and crunchier, a little more ragged around the edges. Complex chords will remain distinct and complex, as the Special Cranker is designed to preserve your tone’s integrity without muddying up the low-end or smearing the midrange. The Special Cranker picks up where our beloved Speaker Cranker left off. It has the same spongy, dynamic, and touch-sensitive character of the original but with more gain, double the output volume (now with a user-friendly Level control), an added Tone control to shape your signal, and a diode selector switch featuring the original asymmetrical Silicon diodes as well as a hot, new Germanium diode option. The More control goes from nearly clean to a medium gain overdrive when at maximum. This control adjusts the bias of the transistor, so you may hear a little noise as you turn the control. Don’t freak out; it’s totally fine. The gain characteristics are dependent on which diodes are chosen. When the Germanium diodes are selected, the Special Cranker delivers a softer, more rounded response with tamed highs and lower output, while the Silicon diodes add a brighter, more modern edge and higher output. Both are exceptionally responsive to playing dynamics and have excellent clarity. The Tone control gives the user full command over treble frequencies, cutting the highs when counterclockwise and adding a slight high frequency boost when turned clockwise. The Level control adjusts the output from nothing to nearly double at maximum.