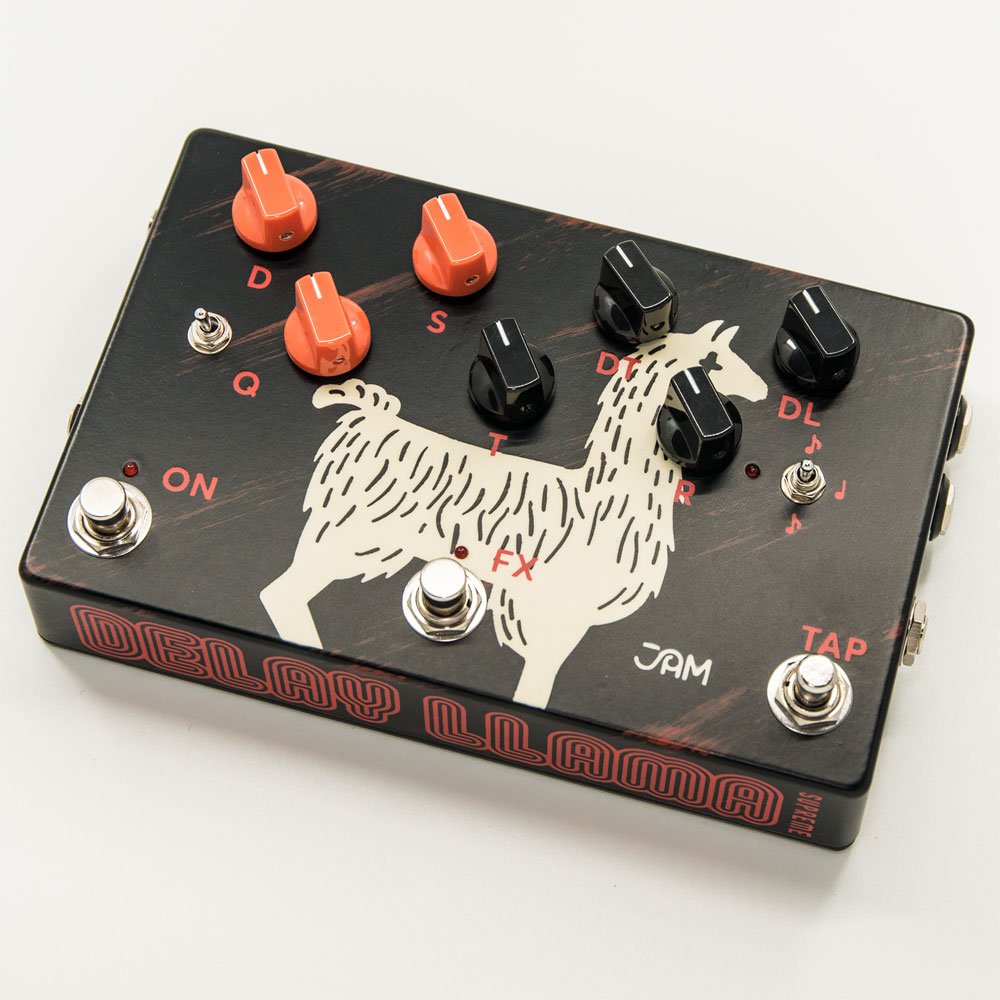 Introducing the Delay Llama Supreme, the fearless leader of the Bucket Brigade. For guitar or bass - this full featured delay pedal offers an analog recreation of vintage tape echo with up to 600ms of delay time and a full range of tone shaping tools. It uses Bucket Brigade chips modeled after the famous Panasonic MN3205's to produce the warm, organic repeats that guitarists have craved since the late 70's while incorporating modern touches like subdivisions, tap tempo, Q control and onboard chorus. Every JAM pedal is hand-made and hand-painted in Athens, Greece and are favorites with some of the top names in the business.

JAM is known for their NOS components and obsession for analog circuits, so naturally the Delay Llama utilizes Bucket Brigade chips to achieve it's rich sound. So why should you care? The Bucket Brigade chip was invented in the late 60's and was the first entirely electronic device that produced discrete time delay of electronic signals. This meant that the modulation effects of the day like delay, chorus, echo, and flange all born and driven by clunky magnetic tape machines could be transitioned into portable and reliable devices. In fact a few years after the chip was invented it was licensed by none other than Roland/Boss and in 1981 they released the DM-2, one of the original BBD delay pedals.

The Bucket Brigade chip works by storing your signal in a series of capacitor cells while transistors fire them off sequentially based on an external clock. Thus the name comes from this motion looking like a line of old school firefighters passing buckets of water down a line. The analogy is also useful when describing the sound of this pedal. When you're passing buckets of water there's guaranteed to be some spillage and the BBD chip is no different. The repeats gain noise and distortion over time making them degrade in a natural sounding way. To keep noise from the external clock to a minimum there is also a fair amount of low pass filtering which increases the warmth of the sound. Those two factors make BBD delays sound a lot like old tape machines so old school guitar players instantly fell for them.

The Delay Llama Supreme marries this BBD technology with full creative control to make the ultimate tape echo in a box.

Delay Time - Controls the amount of time between repeats, up to 600ms. Naturally the Llama does a superb slap-back delay but the extreme can get nice and spacey.

Delay Level - Adjusts the volume of the repeats. This is how you set your ideal mix, whether you like long delay just whispering in the background or a hard hitting, oil-can style.

Repeats - This controls the amount of repeats in your signal loop. As you sweep through to maximum repeats you coax out seriously fun feedback madness that in conjunction with the delay time knob can make an array of time warping sounds.

Tone - How do you take your Grande delay? Light or dark?

Hold Function - A simple momentary switch that will sustain the repeats as long as the button is engaged. It's a lot of fun and an easy way to create ethereal noise behind chord or lead work on the fly.

FX - Depending on the position of the "Q" toggle switch, this button offers two forms of epic modulation. With the switch in the down position you get access to the lush sound of the Waterfall Chorus. Flip the switch up to "Q" to get a super funky auto-wah filter that would make George Clinton proud. Both sounds are endless fun and offer a bridge to vintage and modern delay effects.

**Speed and Depth - These are separate parameters for the Waterfall Chorus effect, just like the original pedal.