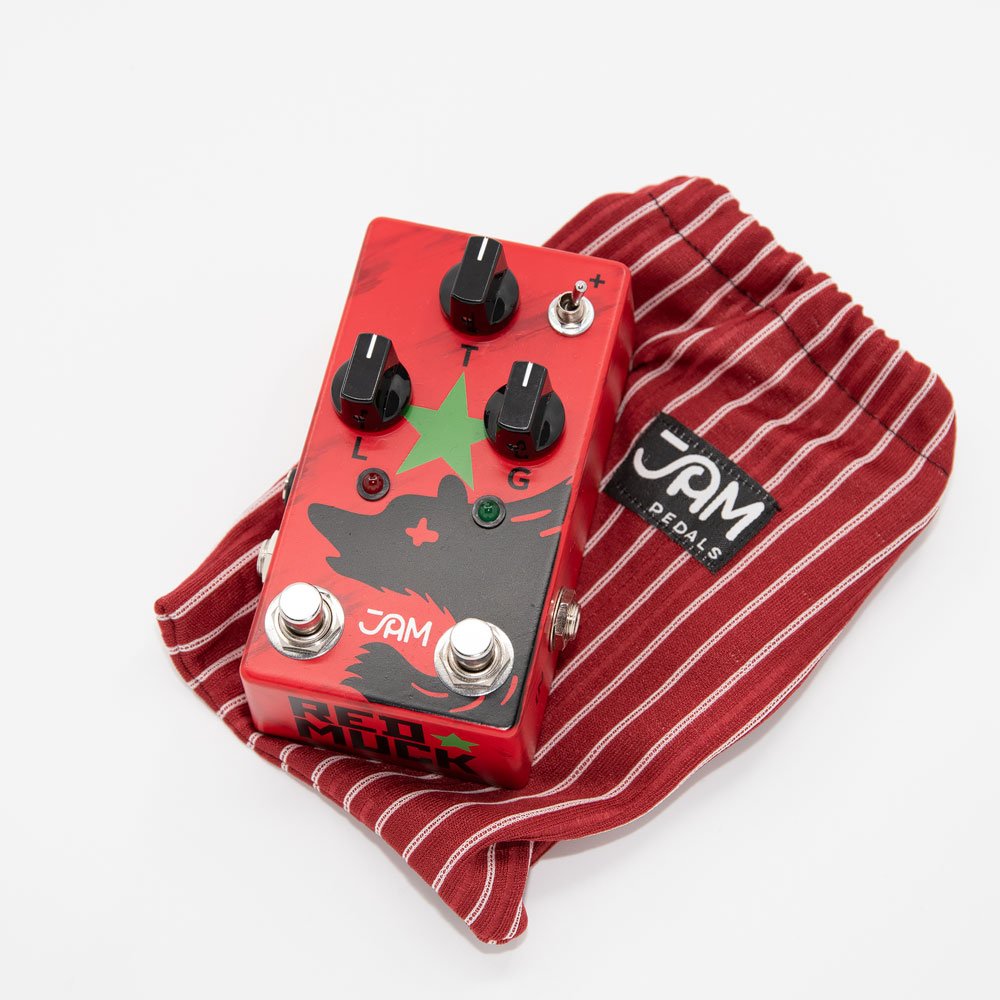 The Great Bear has been poked, and the Red Muck Fuzz is back with more fire power as the MK.2. At its core the Red Muck MK.2 remains a fuzz and distortion pedal inspired by three groundbreaking Electro-Harmonix effects: The '71 Triangle, Red Army and Civil War Fuzz. The Triangle was the very first version of the Big Muff and the Red Army and Civil War are two of the most famous designs to come out of E-H production in St. Petersburg, Russia. The new Red Muck Mk.2 features a selectable boost circuit and diode clipping switch for a more devastating fuzz tone and greater tone shaping capabilities.

What's new with the Mark II?

In addition to a smoking new graphic, the Red Muck Mark II features a selectable boost circuit and a diode switch allowing you to toggle between symmetrical and asymmetrical clipping. In testing, the boost seems to be mostly volume but there is a noticeable bump in overall saturation as well. It's the perfect jumping off point for a big solo or a crushing breakdown. The clipping switch is very useful and turned out to be less subtle than we expected. Choosing between asymmetrical and symmetrical clipping is really a matter of preference but an oversimplified analogy would be: Sweet or Spicy? Symmetrical clipping has a warm, rounded tone that is overtly smooth until provoked by harder picking dynamics. When you switch to asymmetrical mode you'll notice a slight bump in volume, sharper harmonic content and a grittier overall sound. Both have shining moments and will make it easier to find your ideal fuzz tone.

JAM is known for their NOS components but the Red Muck takes a modern approach and combines the ideas behind three legendary fuzz pedals. The inspiration circuits are all from the Electro-Harmonix hall of fame: The '71 Triangle, Red Army Overdrive and Civil War Fuzz. Now before you start writing letters to JAM, the '71 Triangle is the name of the original Big Muff pedal so they didn't skip over anything. Both the Civil War and Red Army pedals were big hits from the Russian production line in St. Petersburg from the late 80's and early 90's. Jammed all into one box, the Red Muck covers fuzz tones ranging from classic and prog rock all the way into deep grunge territory.

From our own playing perspective, it's hard for us to get jazzed on a fuzz pedal, but the Red Muck is very tasteful. Like the other JAM products we've sampled, the Red Muck sounds very rich, but you also hear a lot of the guitar's natural voice even at very gritty levels. Much of the success behind the Muck's tone is it's low end and sustain. The bass response on this pedal is huge, and your guitar is fattened up substantially as soon as you click it on. Single coil guitars get that great creamy texture to them and humbuckers grow three sizes. From there you use the Level, Tone and Gain controls to choose your ultimate fuzz voice. The controls are meant to be used in their full capacity so don't be afraid to turn it all the way up, or down: The Red Muck is full of sweet spots. At low levels of gain you get significant tone thickening with the crisp breakup coming out with harder picking dynamics. With more and more gain the pedal increasingly saturates your signal with smooth, organic distortion. The tone control on the Muck is very useful, and we found it to be a big help when using guitars with very different pickups.

Overall the Red Muck MK.2 is a load of fun. It nails the best fuzz tones of the 70's, 80's and 90's and works well with just about any rig. If you want a fuzz that's built like a tank, and works to better everyone's tone, join the Red Muck Revolution.