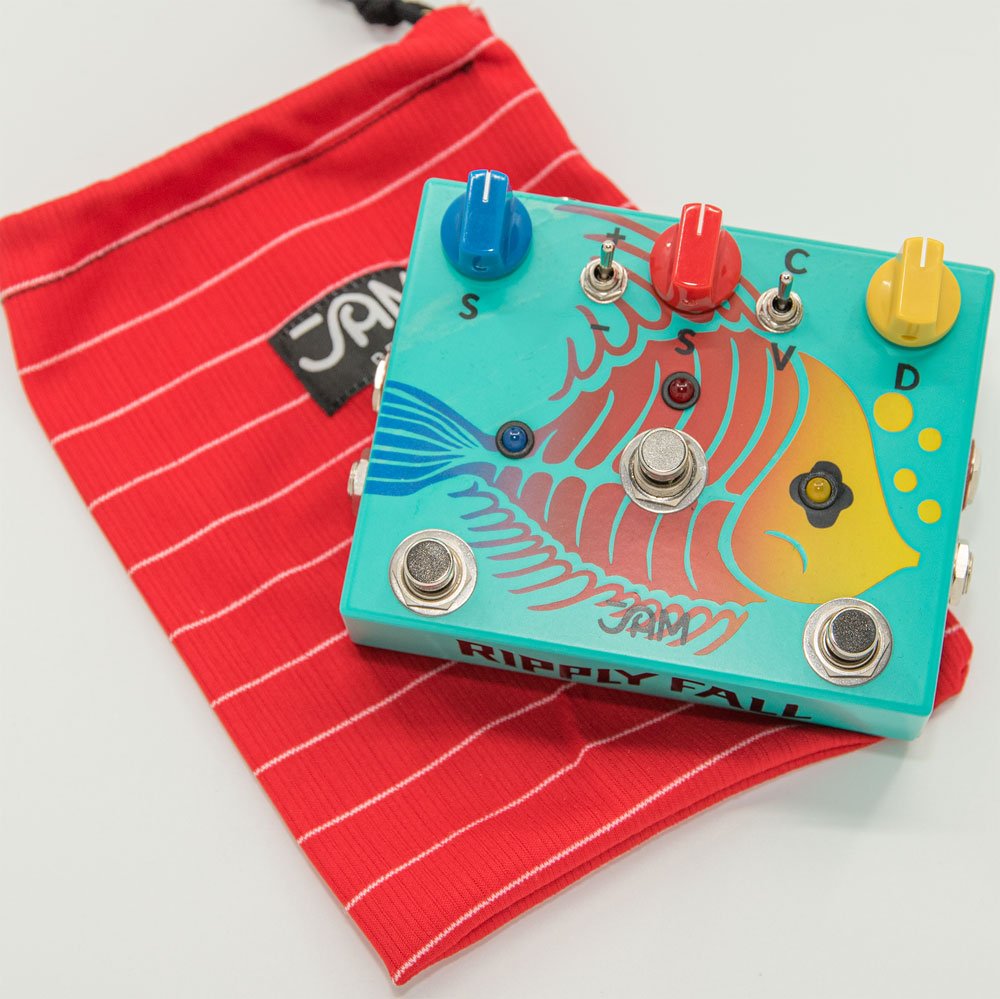 Introducing the modulation triple threat from by JAM Pedals: The Ripply Falls. This is a Waterfall Chorus and Ripple Phaser combination pedal that offers a virtual tour of classic modulation effects with unique tone shaping capabilities. On your right, NOS bucket brigade chips make the Waterfall like a 3D effect for your tone and the vibrato/"wet" toggle switches create a palette of sonic possibilities unlike anything in the market. On your left is an analog 2-stage phaser with a subtle sweep that's transparent and almost vibe-like giving you a perfect platform for swirling or shuddering movement. Lastly, they stuck a "double time" switch in the center that revs up the speed of the Waterfall effect, creating a zany ring-mod sound! Every JAM pedal is hand-made and hand-painted in Athens, Greece and are favorites with some of the top names in the business.
Now let's head down to Ripply Falls....

The Bucket Brigade chip works in a chorus pedal by storing your signal in a series of capacitors and transistors that fire off sequentially based on an external clock. The short delay in the split signal is mixed in with the original to produce a variety of slightly out of pitch harmonies (rather than an echo) and a Low Frequency Oscillator is added to create the rhythmic "swirling" sound. The Waterfall Chorus has a fairly simple layout but with the vibrato and "deep" switches the sounds can get downright crazy. Here's how it works.

The center switch is a warp speed control for the Waterfall chorus. Even if it's going as a slow churn it will be kicked into a ring-mod like frenzy that makes for some great synth noise. We're looking at you JAM bands.

The phase effect is a form of modulation, created by splitting your signal into two paths and mixing an altered signal with evenly spaced notches in the frequency spectrum. The distinct peaks and valleys in the signal occur when certain frequencies in both signal paths cancel each other out, making the whooshing sound we know and love. The speed knob utilizes an LFO (low frequency oscillator) to control how fast you travel through the filter stages, allowing you glide or careen through sonic space. The inspiration for this circuit comes from the iconic MXR Phase 45 which was released in the mid 70's as the 4-stage Phase 90's little brother. With a single speed knob the Ripple is designed to kick up the level of transparency, and show off a high headroom sweep (perfect for rhythmic playing). The result is a rich swirling effect reminiscent of an old school vibe that let's your natural signal take center stage.

In the ever expanding universe of effects pedals it's only logical to save space and signal path whenever possible. With the Ripply Falls JAM makes it twice as easy to take care of your classic modulation needs while offering even more capabilities than the standalone units. In addition to the Ring-Mod button, the latest version of the pedal even has two expression outs for the Depth and Rate control of the Waterfall. Got a dry tone? Take a trip to Ripply Falls.