Thank you for all your support and votes!
USED Fender Bandmaster Head 2x12 1965 Cab w/ Footswitch - No Cover 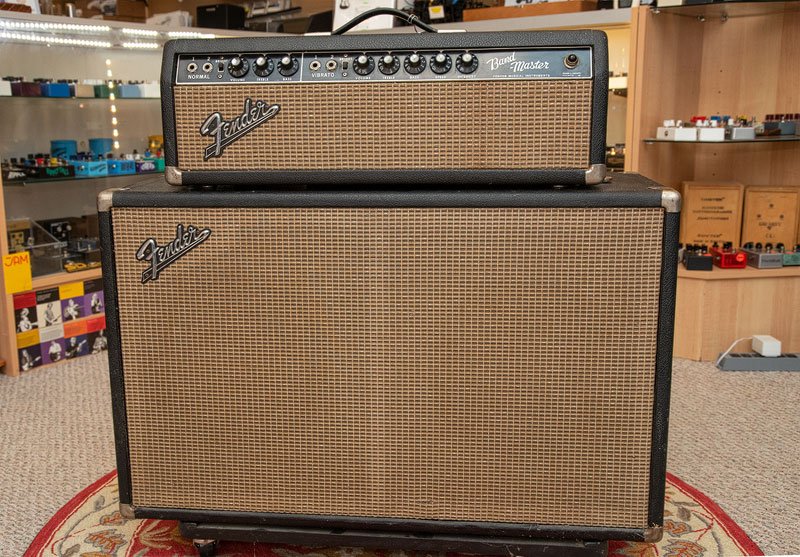 The name Fender Bandmaster goes back a long way...all the way to 1953. For many years amps did multiple tasks, and early Fender Bandmaster amplifiers had both instrument and microphone inputs. The name Bandmaster really meant "plug the whole band in". Given the cost of good musical equipment, it was not uncommon for players of that era to share amps. And Fender products in the 50's and 60's were pricy and not considered amatuer or "everyman" products (that's why there was Harmony, Valco, Silvertone, etc.). A 1953 Bandmaster in today's dollars is $2400, solidly in the boutique category for a low wattage 1x15 combo.

But the Bandmaster name sounded good, and it stuck. By 1960 the Bandmaster had morphed to a guitar-specific 2-channel amplifier in a 3x10 combo. In 1963 it became the familiar 2x12 "piggyback" with separate head and the typical Fender "normal" and "vibrato" channels with high and low sensitivity inputs. We are not sure if Fender invented the piggyback concept, but as amplifiers became bigger and heavier it started to make sense to split the amp from the speakers. Fender Twins were already a beast, a 3x10 not much better, and the Super Reverb was about the most anyone could deal with in one box. It's why God invented casters.


This 1965 Fender Bandmaster head and cabinet is in very good condition, and all knobs and switches are fully functional and scratch-free. Vibrato and footswitch work fine. All electrolytic capacitors have been replaced for quiet and reliable operation. Technically it is "CBS" as CBS acquired Fender in 1965. But keep in mind that Fender/CBS kept the AB763 schematic unchanged until 1968. And if you recognize the schematic "AB763" you'll recall that this is the same as the Blackface Super Reverb. So yes, this Bandmaster is essentially the 40-watt 2-6L6 Super Reverb with a 2x12 cabinet. Almost, that is: The Bandmaster does not have reverb, and it also has a solid state rectifier is place of a tube rectifier. Fender did their own share of "badge engineering" and through the years repurposed various amp layouts in several formats.

The good news is that Bandmasters don't have the allure of the Supers, and the prices are generally lower than Supers of similar years. Granted a 2x12 and 4x10 are different beasts with a 2x12 being both more efficient, with a fuller midrange punch but slightly less sparkle. But if you are looking to capture some of that Super Reverb magic in a less expensive package, this 1965 Bandmaster offers a range of possibilities that is easier on your back. And a rolling dolly is included.